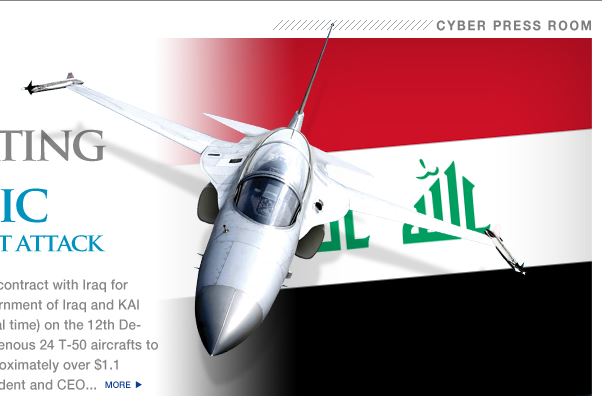 Iraq bought jets from a South Korean company this week in a $1.1 billion deal.

The Iraqi government signed the deal with Korea Aerospace Industries to buy 24 multi-role light fighters to boost its defense capabilities.

The agreement to buy the T-50IQ aircraft was inked on Thursday during a ceremony held in Baghdad, the government said in a statement. The aircraft is an advanced fighter that is equipped with missiles and machine guns.

Iraqi Prime Minister Nouri al-Maliki hailed the signing “as a starting point” to improve the performance of the Iraqi security forces in order to defend the country and confront terrorist groups.

“This deal is the beginning for increasing the performance of the defense and interior ministries in the field of defending the country and fighting terrorism,” Maliki said.

“We have come a long way on the road to completing our air force, and we will continue in this direction to protect Iraq against any aggression.”

Korea Aerospace Industries said on its official website that it would support services for the aircraft for 20 years, which could push the total value of the deal to more than $ 2 billion.

Iraq is facing a rise in deadly insurgent attacks amid political and sectarian tension.

The aircraft will probably serve as trainers for Iraqi pilots that will fly F-16s that have already been ordered from the United States.

Nouri al-Maliki said they could also be used in combat.