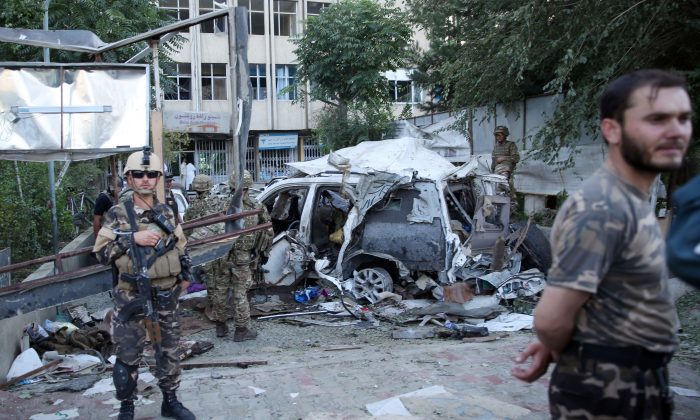 In this Saturday, Aug. 22, 2015 file photo, Afghan security forces and British soldiers inspect the site of a suicide attack in the heart of Kabul, Afghanistan. (AP Photo/Massoud Hossaini)
Middle East

Both attacks were carried out by bombers on foot, wearing explosives-laden vests, two police officers said. One bomber struck in Baghdad’s Bab al-Sharji area, killing nine civilians and three police officers there. Forty-five people were wounded in that explosion.

Two medical officials confirmed the casualty figures. All officials spoke on condition of anonymity because they are not authorized to talk to reporters.

Iraq is going through its worst crisis since the 2011 withdrawal of U.S. troops. The ISIS group controls large swaths of the country’s north and west after capturing Iraq’s second-largest city of Mosul and the majority of the western Anbar province last year.

No group immediately claimed responsibility for the attacks, which bore the hallmarks of the Islamic State group, a splinter of Iraq’s al-Qaida branch. Following its blitz last year, the ISIS now holds about a third of Iraq and neighboring Syria in its self-declared “caliphate.”

Since the emergence of ISIS extremists, Baghdad has seen near-daily attacks, with roadside bombs, suicide blasts and assassinations targeting Iraqi forces and government officials, with significant casualties among the civilian population.

The violence has killed hundreds and displaced tens of thousands of Iraqis.