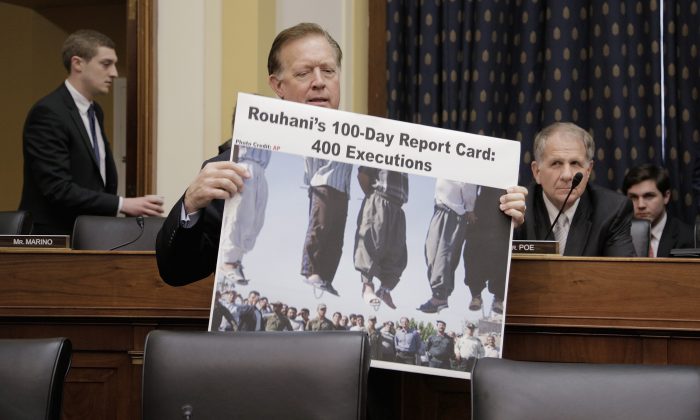 The election of Hassan Rouhani’s as Iran’s president seemed to signal a dramatic change in policies regarding the previous government of Mahmoud Ahmadinejad. However, while portraying an image of moderation overseas, serious human rights abuses continue in Iran, despite protests from human rights groups inside and outside the country.

Rouhani’s government had achieved a diplomatic victory when it obtained relief of punishing international sanctions in exchange for curbing its disputed nuclear program. The agreement, which was endorsed by Iran’s Supreme Leader Ayatollah Ali Khamenei, resulted in immediate economic relief and opened the way for further concessions from Western countries.

According to International Energy Agency (IEA) reports, last September Iran increased its oil exports by 180,000 barrels per day compared to the previous year, equivalent to a 26 percent increase. At the same time, the Rouhani government is trying to change the system of contracts with foreign companies to allow them to take equity stakes in Iranian oil, gas, and other projects. These measures are aimed at luring foreign companies back into Iran.

Not everybody inside the country, however, is cheered by these new developments. On Dec. 10, Maj. Gen. Mohammad Jafari, commander of Iran’s Revolutionary Guard forces, issued a strong criticism of Rouhani’s policies stating, “The military, systems and procedures governing the administrative system of the country are the same as before, but they have been slightly modified and unfortunately infected by Western doctrine, and a fundamental change must occur.”

Declaring also that the Guard cannot remain silent in face of these changes, Jafari issued a clear threat to Rouhani. What we are witnessing in Iran is a confrontation between relatively moderate forces led by Rouhani and hard-liners of whom Jafari is a leading figure. Hard-liners are irked by Rouhani’s foreign policy shift and concerned that they are losing ground with Supreme Leader Khamenei, who approved those changes.

As Dr. Majid Rafizadeh, an Iranian-American scholar and president of the International American Council, has stated, “The more Iran’s economy gets on track, and the more Western oil companies are lured to invest in Iran, the more the government and the hard-liners will move to increase their campaigns to crack down on ordinary people and oppositional groups.”

In just a few days at the end of October the judicial authorities banned the reformist daily Bahar, sentenced the famous actress Pegah Ahangarani to 18 months in prison, and put to death 18 individuals from ethnic minorities. Among the charges against Ahangarani is that she publicly supported the opposition candidates in the 2009 presidential election.

In the meantime, close to a thousand prisoners remain behind bars, among them three leaders of the 2009 protests, Mir Hossein Mousavi, Mehdi Karroubi, and Zahra Rahnavard. Nov. 10 marked their 1,000 days under house arrest. “Nearly all the opposition activists in prison before Rouhani was elected are still in prison,” declared Iranian Nobel Peace laureate Shirin Ebadi.

Human rights activists decry that there is no judicial independence or rule of law in Iran. They are outraged that Rouhani has named Mostafa Pour-Mohammadi as his justice minister. According to the Iran Human Rights Documentation Center, Pour-Mohammadi was involved in mass executions of members of leftist political groups in Iranian prisons, in the extrajudicial assassinations of political opponents abroad, and in the unlawful murder of dissidents within Iran’s borders during his tenure as deputy intelligence minister from 1987 to 1999.

Licenses were revoked from lawyers who have represented prisoners of conscience and over 40 lawyers have been detained since 2009. Dr. Ahmed Shaheed, U.N. special rapporteur on human rights in Iran, has documented widespread abuse and torture of political prisoners in Iranian prisons. In addition, members of minority groups have been imprisoned on charges that they are spreading corruption on Earth.

At a time in which Iran is trying to gain international legitimacy as a democratic country under the rule of law, it is imperative that Rouhani puts an end to those human rights abuses. As stated by Hadi Ghaemi, executive director of the International Campaign for Human Rights in Iran, “President Rouhani has a mandate in the votes of millions of Iranians who propelled him to office to pursue the changes he promised. Now is the time for President Rouhani to show his willingness and determination to defend the rights of the people by condemning such gross human rights violations. His silence is a tacit approval of these violations.”

Dr. César Chelala is a co-winner of an Overseas Press Club of America award. He writes extensively on human rights issues worldwide.