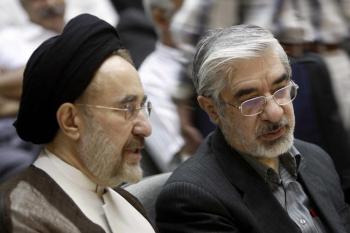 Iranian opposition leader, Mir Hossein Mousavi (R) and his close ally, former reformist president, Mohammad Khatami (L) at memorial service in Tehran on July 31. On Tuesday Mousavi was fired from his position as president of the Iranian Academy of the Arts, a position he held for 11 years. (Ali Mohammadi/AFP/Getty Images)
Middle East

Ali Reza Jahan
View profile
Follow
biggersmaller
Print
Opposition Leader Mir Hussein Mousavi was ousted from his post as president of the Iranian Academy of the Arts on Tuesday. The firing came in the wake of two days of unrest amongst the people of Iran, as they mourned the death of reformist leader Grand Ayatollah Hossein Ali Montazeri.

Mousavi, who still holds a position with the Expediency Discernment Council, an advisory board to the Supreme Leader of Iran, has served as president of the Iranian Academy of the Arts since its creation 11 years ago.

Mousavi, the last prime minister of Iran before the position was eliminated in 1989, has become a polarizing figure in Iran since the controversy surrounding the Iranian presidential elections in June.

Since then, Mousavi has been seen as the leader of the opposition and reform movement in Iran, creating a rift with the hard-line politicians and the supreme leader, Ayatollah Ali Khamenei, with whom he once sided.

During the last several days, conservative hard-liners have pressed for the judiciary arm of the regime to try Mousavi on charges of inciting unrest amongst the people of Iran.

Mousavi’s firing is suspected to be a less severe punitive measure taken by the regime, meant to prevent the reformist leader from attending public events and inciting what the regime sees as unrest.

The announcement of Mousavi’s firing also comes as U.S. and international pressure increase on Iran regarding its nuclear program.

Last week, U.S. Assistant Secretary of State Philip J. Crowley acknowledged that the State Department had begun investigations into Iran’s possible development of a neutron initiator or bomb trigger that would be used to set off a nuclear bomb.

The U.S. has set a year-end deadline for the Iranian regime to accept a U.N.-brokered deal that would allow for a trade of Iran's enriched uranium for nuclear fuel for use within nuclear power plants. If the Iranian regime does not agree to the deal, a fourth round of sanctions may be enacted.

On Tuesday, White House officials increased the pressure on the Iranian regime with a warning regarding the approaching deadline.

“Mr. Ahmadinejad may not recognize, for whatever reason, the deadline that looms, but that is a very real deadline for the international community. And I think all of those involved in the P5-plus-1 would encourage Iran to take that deadline as seriously as it's being taken by us to live up to their responsibilities,” said White House spokesperson Robert Gibbs in a press briefing Tuesday.

“It is in his control what Iran decides to do,” he said.

The offer by the U.N. includes a conditional trade of nuclear fuel for the low-enriched uranium Iran is producing.

However the reform movement seems to be gaining strength within the Islamic nation.

On Tuesday in Kerman, in the south of Iran, a crowd of reformist Iranians forced their way through security forces and set free two thieves who were set for execution.

The thieves were later recaptured.