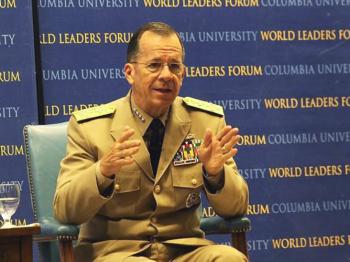 Admiral Mike Mullen, Chairman of the Joint Chiefs of Staff in the U.S. (The Epoch Times)
US

Gary Du
View profile
Follow
biggersmaller
Print
NEW YORK—Chairman of the Joint Chiefs of Staff Admiral Mike Mullen said that a potential U.S.-led attack on Iran is still “on the table” in an attempt to quell their nuclear program but diplomatic or economic sanctions are preferred.

Compared with other options, the “use of the military should be the last option,” said Mullen at Columbia University in New York City on Sunday night.

“The diplomatic, the engagement piece, the sanctions piece, all those things, from my perspective, need to be addressed to possibly have Iran change its mind about where it's headed,” he said.

The admiral said he and his staff have looked at a potential military option to delay Iran's progress in making a nuclear weapon, saying that the United States have developed potential plans to attack the Iranian nuclear site.

“I think I was very clear about the decision space here, not much decision space to work with because both outcomes—having a weapon, and striking—generate unintended consequences that are difficult to predict,” he added.

Iran has insisted that it is only trying to make energy in its nuclear program while the U.N. and the United States say the country is attempting to make nuclear weapons.

If Iran were to properly develop a working nuclear weapon, other countries in the Middle East would probably also try to develop their own, said Mullen. Another of the main concerns center around Iranian President Mahmoud Ahmadinejad's threats to attack Israel.

U.S. May Be Unprepared for a Nuclear Iran

Over the weekend, The New York Times reported that U.S. Secretary of Defense Robert Gates sent a letter to President Barack Obama, which said that the United States doesn't have a plan to deal with Iran if they develop nuclear weapons.

Gates released a counterstatement, which said the Times article inaccurately described his letter to the president. "The memo identified next steps in our defense planning process where further interagency discussion and policy decisions would be needed in the months and weeks ahead," said Gates, in a written statement on Sunday night.

Admiral Mullen spoke in front of reporters after a conference before President Obama comes to New York. The president will speak in New York on Thursday to push a financial reform package for Wall Street firms.