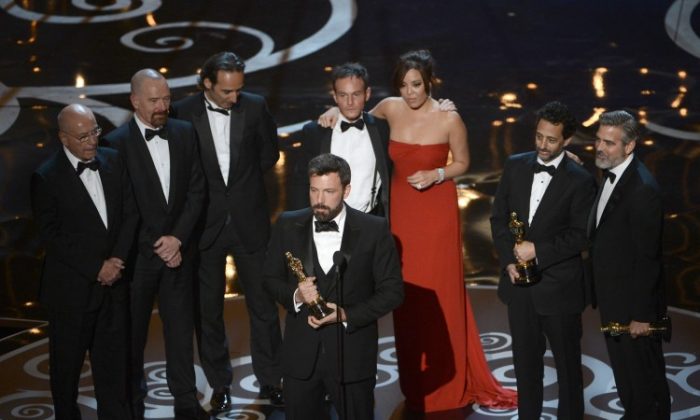 Actor/producer/director Ben Affleck accepts the best picture award for ”Argo” onstage along with members of the cast and crew during the Oscars held at the Dolby Theatre on Feb. 24, 2013 in Hollywood, California. Making a Hollywood production about a true event that had much impact on U.S.-Iran relations while remaining accurate was a challenge for filmmakers. (Kevin Winter/Getty Images)
Middle East

“Argo” recipient of multiple Oscars including best picture, has become the focus of a dialogue about the politicization of Hollywood—exactly what director Ben Affleck sought to avoid.

“I tried to be as true to the story as possible—because I didn’t want it to be used by either side. I didn’t want it to be politicized internationally or domestically in a partisan way. I just wanted to tell a story that was about the facts as I understood them,” Affleck told the Huffington Post in October 2012.

Iranian officials denounced the film on Monday; Iranian Minister of Culture and Islamic Guidance Mohammad Hosseini called it “anit-Iranian,” according to state-run Press TV. The semi-official Mehr News Agency wrote: “Hollywood has been an instrument for the U.S. politicians to use it for their political purposes, not based on reality, but one-sided and distorted, to present to the world.”

He said, “I’m not an authority in any way on Middle Eastern history,” but said he’s always been interested in the region. Terrio and Affleck, whose major in college was Middle Eastern studies, collaborated and discussed the best way to present something accurate yet entertaining and “nail-biting,” Terrio said.

The film is based on the true story of the rescue of six U.S. diplomats when the U.S. Embassy was seized by Iranian revolutionaries in 1979. The incident was a severe blow to U.S.-Iranian relations.

When asked whether “Zero Dark 30,” a film about the capture and execution of Osama bin Laden, sacrificed historical accuracy for entertainment value, Terrio skirted around the question.

“I feel they [accuracy and entertainment] need to exist in symbiosis,” Terrio began. He admitted it was a “general and nonsense” way to answer the question.

Former-President Jimmy Carter has criticized “Argo” for down-playing the Canadian government’s role in the rescue and up-playing the American CIA’s role.

In an interview with CNN’s Piers Morgan, Carter said: “90 percent of the contributions to the ideas and the consummation of the plan was Canadian.” The film, however, “gives almost full credit to the American CIA.”

Ken Taylor, the former Canadian ambassador to Iran who housed the hostages and whom Carter has named as the real hero of the story, was satisfied with Affleck’s mention of Canada in his Oscars speech, according to the Canadian Broadcasting Corporation (CBC).

Taylor is quoted by Mondoweiss, a news website that covers American foreign policy in the Middle East “chiefly from a progressive Jewish perspective,” according to its website. Taylor said Argo failed to depict the Iranian revolutionaries’ “more hospitable side, and an intent that they were looking for some degree of justice and hope, and that it all wasn’t just a violent demonstration for nothing.”