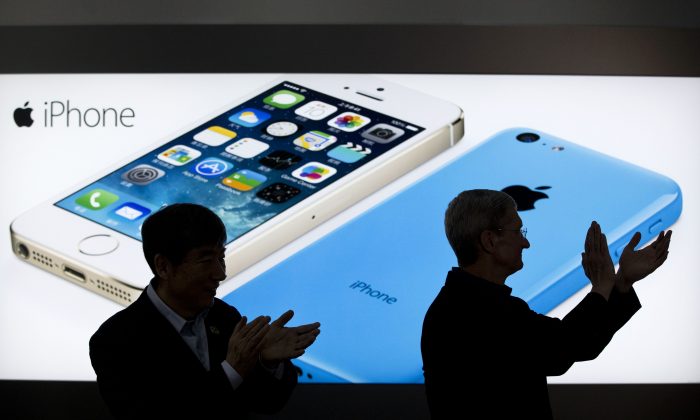 In this Jan. 17, 2014 file photo, Apple CEO Tim Cook, right, and China Mobile's chairman Xi Guohua are silhouetted against a screen showing iPhone products as they applaud during a promotional event that marks the opening day of sales of China Mobile's 4G iPhone 5s and iPhone 5c at a shop of the world's largest mobile phone operator in Beijing, China. The high-stakes battle between the world's largest smartphone makers is scheduled to wrap up this week after a monthlong trial that has pulled the curtain back on just how very cutthroat the competition is between Apple and Samsung. Closing arguments in the patent-infringement case are scheduled to begin Monday, April 28 with the two tech giants accusing each other, once again, of ripping off designs and features. At stake: $2 billion if Samsung loses, a few hundred million if Apple loses. (AP Photo/Alexander F. Yuan, File)
Tech

The iPhone 6 rumors are continuing to fly. It was reported that the new Apple smartphone could be coming out about a month earlier than expected.

For the past few months, reports have said that the phone was likely coming out in September but Reuters on Friday said Apple will launch it in August. Previous iPhone models have come out in September.

The 4.7-inch version of the smartphone will come in August, the reports said. However, the 5.5- or 5.6-inch variant will arrive in September.

Reuters confirmed with its sources that there will be 5.5-inch and 4.7-inch versions. It said that about 80 million iPhone 6 models will be produced this year.

Industry experts said that making the iPhone screen larger will help Apple compete with other handset makers, including its rival Samsung. Other phone makers have increased the sizes of their phones in recent years.

AP update about Apple: Apple on verge of buying Beats for $3.2B

Citing people familiar with the negotiations, The Financial Times says Apple could announce the deal as early as next week. In its report posted online late Thursday, the newspaper warned the talks could still collapse if the two sides cannot agree on some final details.

Both Apple Inc. and Beats Electronics declined to comment to The Associated Press.

If the deal is completed, it would be by far the largest purchase in Apple Inc.’s 38-year history.

The Cupertino company has traditionally seen little need to buy technology from other companies, reflecting Apple’s confidence in its ability to turn its own ideas into revolutionary products such as the Mac computer, the iPod, the iPhone and the iPad.

But Apple hasn’t released a breakthrough product since its former CEO and chief visionary, Steve Jobs, died in October 2011. The innovative void has increased the pressure on Jobs’ hand-picked successor, Tim Cook, to prove he is capable of sustaining the success and growth that turned Apple into the world’s most valuable company and a beloved brand.

Cook has shown a willingness to spend more of Apple’s money than Job ever did. Among other things, Cook began paying Apple stockholders a quarterly dividend and has progressively committed more money to buying back the company’s shares.

The negotiations also are taking place as the music market increasingly tilts toward streaming and away from the downloads that once drove the success of Apple’s digital music store, iTunes.

U.S. revenue from downloads — which iTunes dominates — dropped 1 percent to $2.8 billion in 2013, while streaming music revenue from the likes of Pandora and Spotify soared 39 percent to $1.4 billion, according to the Recording Industry Association of America.

While downloads still command 40 percent of the market, streaming revenue now accounts for 20 percent of total revenue, up from just 3 percent in 2007.

Beats Electronics LLC was founded in Santa Monica, California in 2008 by Dr. Dre and Jimmy Iovine. Its headphones were manufactured by Monster Cable until the two companies parted ways in 2012. The headphones have become a bit of status symbol worn by celebrities as well as audiophiles.

In 2012, Beats bought streaming music service MOG, which it transformed and relaunched as Beats Music earlier this year. The launch was fueled by a landmark partnership with AT&T that allowed up to five family members to pay $15 a month for the service as long as they were AT&T wireless customers. The deal broke the industry mold of charging each person $10 per month.