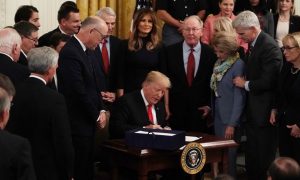 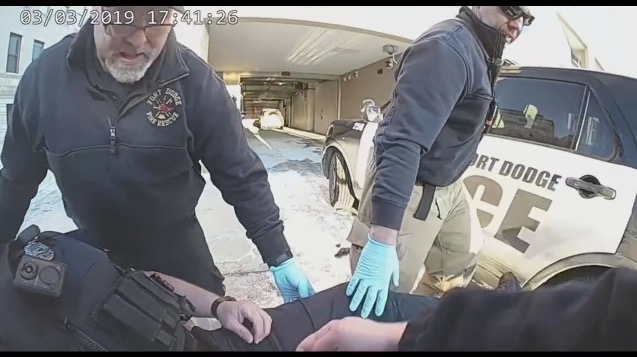 Medics treat an unresponsive police officer exposed to what officials believe may have been the deadly synthetic opioid fentanyl in Fort Dodge, Iowa, on March 3, 2019. (Fort Dodge Police Department)
Crime and Incidents

Officials said an Iowa police officer was given Narcan—an opioid overdose reversal drug—after coming into contact with an unknown substance during a traffic stop.

The Fort Dodge officer was conducting the stop on Sunday, March 3, when it is believed he was exposed to the potentially deadly opioid fentanyl.

The situation unfolded after the officer pulled over a female driver at around 5 p.m., the department said in a news release on Facebook.

The woman, identified as 28-year-old Kayla Potter, allegedly provided “false identification information” to the police officer and was driving on a suspended license. She was taken into custody.

Officials said the officer’s symptoms were serious enough that he called for medics to meet him at the law enforcement center so he could be examined.

Responders found him “to be lethargic and unresponsive in his patrol vehicle,” according to the news release.

Video captured the moments when the medical crew arrived to assist the officer and loaded him into an ambulance.

Medics gave the affected officer an opioid overdose reversal drug on the way to the hospital, according to the news release. Later, he received further doses.

“The officer quickly recovered the Narcan treatment and was kept overnight for precautionary observations before being released,” the news release said.

While police are waiting for confirmation on the exact nature of the substance, authorities believe the officer came in contact with a form of fentanyl.

“It might not be in our area yet, but we want to know what is going on with it and how to deal with it,” said Capt. Ryan Gruenberg, according to ABC5.

The spread of the deadly synthetic opioid has posed a challenge to law enforcement.

“This was an incident that we knew that could happen, unfortunately, it did happen and there are things that we can learn from this,” Gruenberg said.

The officer made a quick recovery and was released from the hospital around noon Monday.

“The nation’s opioid crisis is fueling the council’s grim probabilities, and that crisis is worsening with an influx of illicit fentanyl,” the NSC said in a statement on Jan. 14.

According to the National Institute on Drug Abuse (NIDA), more than 130 people in the United States die of an opioid overdose each day, while the cost of prescription opioid misuse in the country is $78.5 billion a year. This includes the costs of health care, lost productivity, addiction treatment, and criminal justice involvement.

The recent report comes at a time where public health officials and law enforcement are highlighting the risks of the opioid epidemic that is plaguing Americans.

Fentanyl, a synthetic opioid pain reliever 50 to 100 times more potent than morphine, surpassed heroin to become the most common drug linked to an overdose death in 2016, according to the CDC (pdf).

Two milligrams of fentanyl is a lethal dose for a non-opioid user.