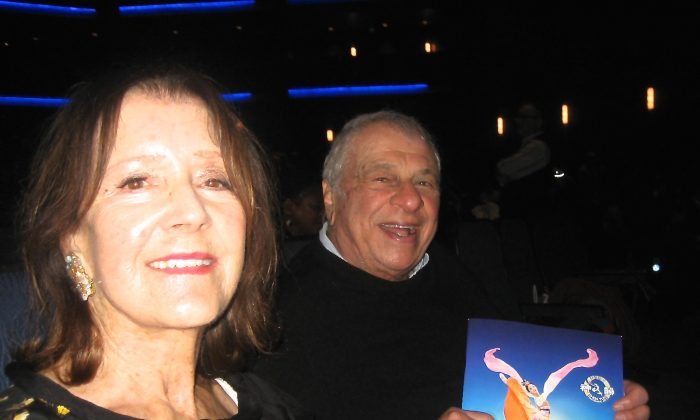 Mr. Zilkha is an accomplished entrepreneur, with many credits to his name. His business portfolio is long and impressive. Some of his achievements include Zilkha Renewable Energy, which was purchased by Goldman Sachs, and was one of the nation’s largest independent wind energy development companies, he also founded Mothercare, one of the U.K.’s largest retail chains.

“We loved it,” said Mr. Zilkha. “I’m going to talk about it a great deal forever.”

Established in 2006, New York-based Shen Yun is a non-profit organization dedicated to bringing China’s 5,000 years of divinely inspired culture to life through the performing arts. Having reached millions of people across nearly 20 countries and over 100 cities, Shen Yun is widely considered to be a global phenomenon.

Mr. Zilkha appreciated many aspects of the performance, including the costumes.

Ms. Haley seemed to enjoy the show as much as her friend.

“I’m amazed by the production. The projections, the scenery in the back is extraordinary,” said Ms. Haley. “It’s just so perfect.”

As the website explains, “With state-of-the-art graphics technology, Shen Yun’s digital-backdrop team creates vividly animated settings, extending the stage and transporting the audience to a world where heaven and earth are one.”

Mr. Zilka said he’d never seen a performance quite like Shen Yun. “Never ever. And I’m quite old,” he said. “It’s a very good surprise.”

Both Mr. Zilkha and Ms. Haley agree that Shen Yun is a must-see experience.

“I think it’s inspiring,” said Ms. Haley. “It’s an inspiration, and I noticed all the different nationalities of people as we came in, in the audience. So it’s an inspiration to everybody here.”

Shen Yun’s New York Company will now be moving on to Santa Barbara, for shows throughout next weekend, March 28 and 29.