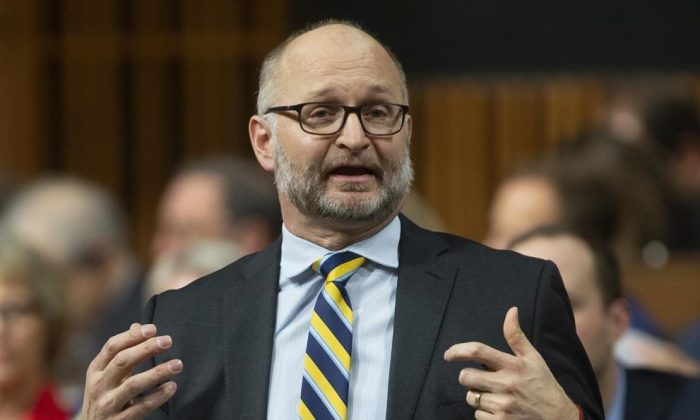 Minister of Justice and Attorney General of Canada David Lametti responds to a question during Question Period in the House of Commons on Feb. 7, 2019 in Ottawa. (The Canadian Press/Adrian Wyld)
Canada

OTTAWA—A Liberal MP has joined opposition calls for an investigation into an allegation that former attorney general Jody Wilson−Raybould was pressured by the Prime Minister’s Office to help SNC−Lavalin avoid criminal prosecution.

New Brunswick MP Wayne Long says in a statement posted to social media that he was “extremely troubled” when the allegation surfaced last week and nothing he has heard since has made him feel less unsettled.

“How the law treats individuals or corporations in our society is not, and should never be, incumbent upon the political pressure they can exert upon politicians,” he says.

Long stresses he’s not “rushing to any judgment” in the matter, but believes “a full and transparent investigation” by the House of Commons justice committee is necessary to provide answers in the affair. For that reason, he says he supports an opposition motion to launch an inquiry.

Conservatives and New Democrats on the justice committee joined forces to get an emergency meeting on Feb. 13 to consider a motion calling on nine high−ranking government officials to testify, including Wilson−Raybould herself. The list also includes David Lametti, who replaced Wilson−Raybould as federal attorney general in a January cabinet shuffle, the prime minister’s chief of staff, Katie Telford, and his principal secretary, Gerald Butts.

The New Democrats said on Feb. 11 that the federal ethics commissioner, Mario Dion, is looking into the events, after they requested he do so last week.

“Justin Trudeau promised Canadians he would change the way politics worked in Ottawa, but instead his Liberal government continues to prioritize helping insiders and the rich get ahead. Canadians deserve better,” said Charlie Angus, the party’s ethics critic, in a written statement.

Lametti, meanwhile, is set to face a fresh round of questions about the simmering political controversy. He will be pressed for details on the brewing allegations after giving a speech to a gathering of lawyers today.

The Globe and Mail newspaper reported last week that Prime Minister Justin Trudeau’s aides leaned on Wilson−Raybould to help avoid a prosecution of SNC−Lavalin on bribery and fraud charges.

The newspaper says Wilson−Raybould was shuffled to the veterans affairs portfolio after she refused to direct the public prosecutor to forge a remediation deal with the company, which would bypass a criminal conviction.

The Liberal government maintains that while discussions on the matter took place with Wilson−Raybould, she wasn’t pressured or told to issue a directive to the prosecutor.

Trudeau, who is in British Columbia today, is also likely to face questions about the nature of those closed−door discussions.