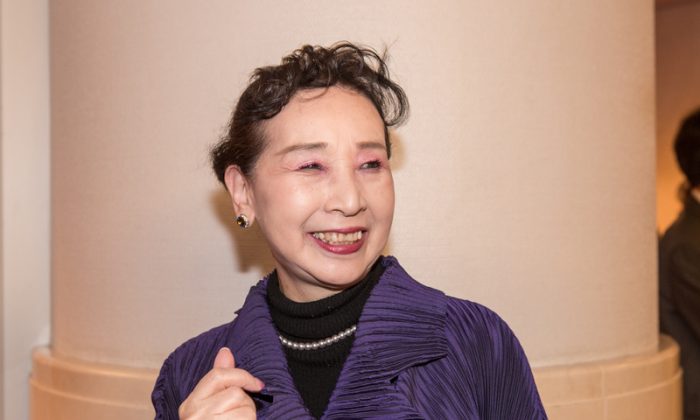 She was captivated by Shen Yun Performing Arts World Company after she saw the evening performance at the Bunkyo Civic Hall in Tokyo, Japan on Jan. 29, 2019. Fascinated by the magnificent classical Chinese dance accompanied by live music and intriguing digital backdrops, Akoh said that she felt she was in the divine world.

“This is my first time seeing the Shen Yun performance, and I feel very fortunate that I was available to see the show after learning about Shen Yun from TV and other mass media in the past,” she said excitedly.

“Every performer’s dancing skills are superb,” Akoh explained. “Though no vocal languages are employed, they depicted every character’s state of mind by means of body language and dance.”

“The backdrops are fantastic. How on earth did they make it?” she added. “I was overwhelmed by the magnificence and the seamless coordination.”

As an iconic figure in Japan’s art circles, Erika Akoh had a keen observation on Shen Yun’s performance in terms of Shen Yun’s storytelling and its connotations.

“These dancers have really learned something, so that they are able to portray such connotations,” she said. “These dancers’ moods were synchronized with the music perfectly that they deeply touched all the audience. Such high level of synchronization [between the performance on the stage and the music] is wonderful. I think they are creating peacefulness.”

“I deeply felt the world’s indispensable qualities of truthfulness, compassion, gracefulness, and peacefulness in the program,” she recalled. “Through dance performance, these qualities are transmitted in a natural manner. The traditional values are portrayed exquisitely that they are easily understandable.”

“Shen Yun enables the entire world to have the same goal and the same yearning. It is the art that can bring magnificence, brightness, and peacefulness to the world,” she said. “At the moment when the scene of Lord Buddha appeared, I felt like I was shocked. The feeling was overwhelming, as if I was in a golden and dazzling world.”

In the end, she said with satisfaction, “I seemed to see the entire program with the hope of gaining the energy and vitality [from the Shen Yun performance].”