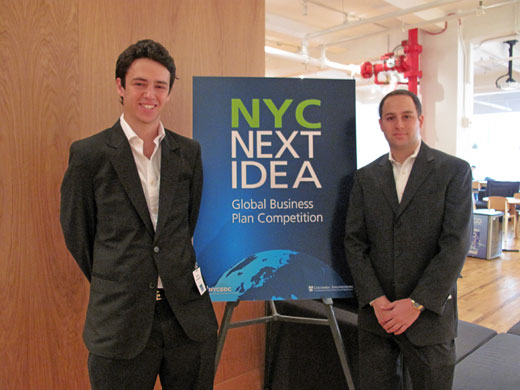 Tomas Grosskopf, Universidad de Buenos Aires (L) and Brian Shimmerlik, NYU Stern School of Business, MBA candidate, of TaxiTreats, one of the finalists in the Next Idea international business plan competition. (Courtesy of NYCEDC)
US

NEW YORK—The final round of the Next Idea international business plan competition will take place on Wednesday, March 21, at Columbia University’s Davis Auditorium.

Six teams of students, three fully international and three with one New York City-based full-time student, are competing for a total of $35,000 in cash prizes. The teams were chosen from 270 business plans, submitted by 700 participants from more than 60 countries.

Countries represented this year include Argentina, Canada, Czech Republic, and Poland, as well as the United States.

A combination of venture capitalists, entrepreneurs, and academics will be judging the business plans.

“New York’s ability to remain as the world’s business capital will require us to continue to nurture and expand our entrepreneurial sector,” said Seth Pinsky, president of New York City Economic Development Corporation, in a video on the corporation’s website.

The event at Columbia University’s Davis Auditorium is free and open to the public, is from 8:30 a.m. to 12:30 p.m., and will include breakfast and lunch. Register online at NYC Next Idea Final Round.