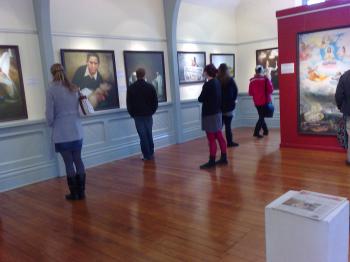 At Christchurch's Gallery, The Art Centre. (The Epoch Times)
US

The aim of the exhibition, which ran from July 20 to August 2, was to raise awareness about the persecution of Falun Dafa practitioners in China and most of the paintings were by artists who had actually experienced the persecution first hand.

For many people the exhibition was a fortuitous encounter.

Mr. Raymond, a Christchurch musician, said that he was deeply moved by the background music and that the paintings were of such a high quality he was left speechless.

He had heard a little of the persecution, but was still shocked to hear a first hand version from one of the exhibition's hosts.

He asked a question many people asked during the two weeks. “Why does the Chinese Communist Party carry on this way?”

On the last day of the exhibition Mr. Raymond gave a short violin recital in memory of the practitioners who had been persecuted and for the Falun Dafa practitioners who were bringing awareness of the persecution to the world.

The Art Centre manager was so impressed that she made sure all her staff also took time out to see the paintings. Some members of the staff had seen the exhibition before but were keen to learn more about the persecution and about Falun Dafa.

Many of the artists from the different mediums of art who attended said that they had been inspired to create their own works reflecting the persecution.

A Thai professor, who came with his family, said he had been a witness to the Tiananmen Square massacre. He was also impressed by the exhibition.

A few visitors, overcome by reality of the paintings, simply did not believe that the persecution, which is now into its eleventh year, was actually happening in China today.

The exhibition opened many people's minds as to the true nature of the Chinese Communist Party and to questions over the morality of what was happening in China today.

The most frequently asked question from visitors was “When will the persecution stop?”