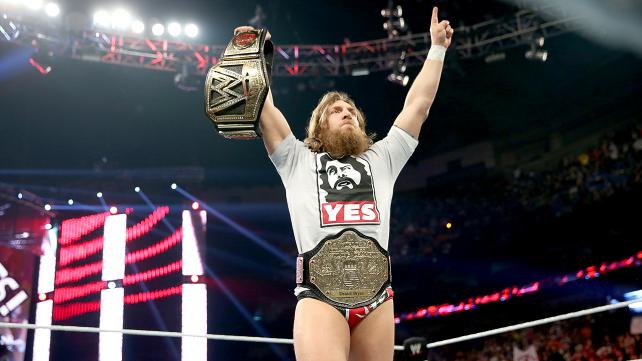 This past Monday on Raw, Stephanie McMahon announced she would not strip Daniel Bryan of his championship, but allow him to relinquish it next Monday on Raw. With Stephanie McMahon not stripping Daniel Bryan of the title on Raw, does it mean that maybe WWE has not yet decided on what to do with the championship? If WWE has not decided on what to do with the title. this idea maybe a good one…..split the WWE World Heavyweight Champion.

There are a few match possibilities that could potential be huge for Daniel Bryan’s return. One of those matches could be Kane vs Daniel Bryan. If the titles were split and Kane won the WWE Championship, it would allow Bryan and Kane to pick up where they left off. This would be a good idea because it gives Daniel Bryan a chance at redemption for Kane putting him out of action.

Splitting the WWE World Heavyweight Championship may be the best decision right now for the WWE. Daniel Bryan right now is the biggest and most beloved superstar in the WWE. Splitting the titles, may not give fans exactly what they want, but it lets them know that even though Daniel Bryan is out, he is still the guy. Letting Daniel Bryan keep the World Heavyweight Championship and giving the WWE title to someone else is the best way to  go (in my opinion), and it also opens up many opportunities for the WWE creatively.