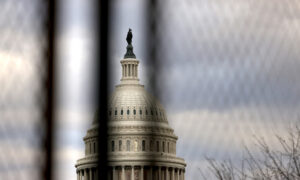 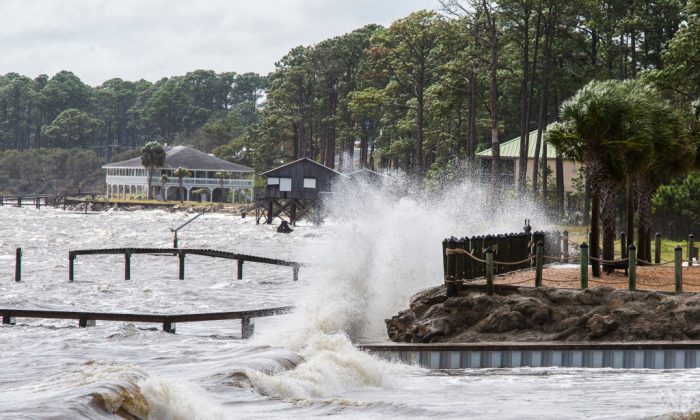 Waves crash against a home seawall as Hurricane Michael approaches in Eastpoint, Fla. on Oct. 9, 2018. Mark Wallheiser/Getty Images
US News

Hurricane Michael is intensifying as it races toward Florida, with winds forecast to exceed 120 miles an hour and a “life-threatening” ocean surge expected to cause as much as $15 billion in damage.

Homeowners in Michael’s path have been advised to evacuate by late Oct. 9, before it makes landfall Oct. 10 near Panama City. The storm has already cut oil production in the Gulf of Mexico by 40 percent and natural gas output by 28 percent.

Michael is set to be the second hurricane to make landfall in the U.S. in a month. It has been upgraded to a Category 3 storm at latest report, according to the National Hurricane Center, and it is expected to drop 4-8 inches of rain on the region, with some areas getting as much as 12 inches.

“Additional strengthening is expected, and Michael is forecast to be a major hurricane at landfall,” said Dan Brown, a senior hurricane specialist at the National Hurricane Center, in a forecast analysis.

Michael is arriving after Florence hit North Carolina on Sept. 14, causing devastating floods, killing at least 39, and causing about $45 billion in estimated damages. While Michael will land with stronger winds, it won’t linger after it comes on shore the way Florence did, inundating the Carolinas with rain for days and days.

“It will be a different monster than Florence,” Brett Rathbun, a meteorologist at AccuWeather Inc. in State College, Pa., said by telephone. Rather than lingering, Michael is expected to race off across Georgia on Oct. 11, and settle off the coast of Massachusetts by this weekend, he said. Duke Energy Corp. which saw about 1.5 million customers in the Carolinas lose power from Florence, is warning its 1.8 million Florida customers to prepare for extended power outages. The company is moving utility crews and resources into the area to help restore power as soon as it’s safe to do so.

The impending storm also drew multiple tweets from President Donald Trump on Oct. 9. “Good news is, the folks in the Pan Handle can take care of anything,” one of the tweets noted, “@FEMA and First Responders are ready—be prepared!”

Damages from the storm could reach between $5 billion and $15 billion, depending on its intensity after landfall and how quickly it moves through the region, analysts said. AccuWeather forecasts total damage and economic impact will be close to $15 billion, while Chuck Watson, of Enki Research in Savannah, Georgia, suggests it will cause $7 billion to $10 billion in damage, with Panama City, Florida, taking the hardest hit.

“Michael is definitely shaping up to be a classic hurricane,” Watson said by telephone. “So the estimates are a bit more stable since you don’t have the stall and wander problem” that made Hurricane Florence hard to calculate.

While the panhandle is more sparsely populated than many other areas of Florida, it includes the capital city of Tallahassee, Pensacola and Panama City.

After making landfall in the Panhandle region, the storm is forecast to bend back across Georgia, North Carolina, and South Carolina later in the week, ending up back in the Atlantic.

Here’s the latest on the storm’s effects: Hurricane warnings are in effect from Suwannee River, Florida, to the Florida-Alabama border, and a hurricane watch is in effect for the entire coast of Alabama. The Coast Guard on Oct. 9 closed ports at Gulfport and Pascagoula in Mississippi, Mobile in Alabama, and Panama City, and Pensacola in Florida, and restricted vessel traffic on the Intracoastal Waterway.

Energy companies pulled crews off 75 production platforms of the 687 currently in the Gulf of Mexico, according to the Bureau of Safety and Environmental Enforcement.

The Atlantic has produced 14 named storms this year. They include Hurricane Florence, the most powerful one so far this year, and Tropical Storm Gordon, which made landfall on the Alabama-Mississippi border last month.

The panhandle region has suffered significant storm damage in the past, hit by Hurricane Ivan in 2004 and Hurricane Dennis in 2005. In 2010, the Deepwater Horizon oil spill hit Pensacola Beach, hurting the fishing and tourism industries.

The area is also home to a number of military bases, including the Naval Air Station at Pensacola and Eglin Air Force Base.