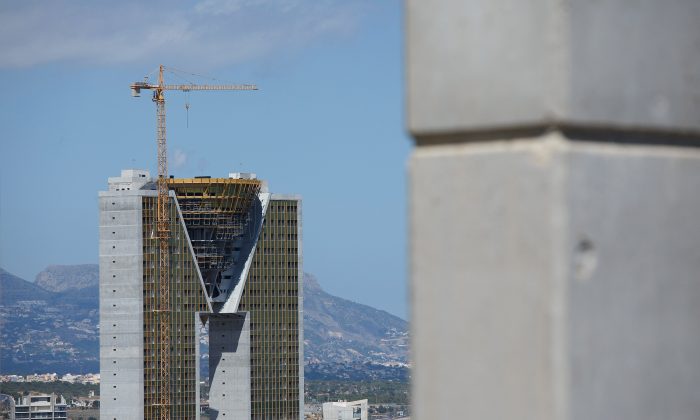 A crane stands on top of In Tempo building on August 9, 2013 in Benidorm, Spain. The construction of the In Tempo building began during the economic boom and was meant open in 2009 as the tallest residential building within the E.U. at almost 200 metres high. However after a catalogue of building problems the 47-story twin tower building remains unfinished and has been transferred to the SAREB or "Bad Bank." (Photo by Pablo Blazquez Dominguez/Getty Images)
Business & Economy

Intempo, Spanish Skyscraper, Has no Elevator to the Top (+Photos)

The Intempo skyscraper–located in Benidorm, Spain, and is 47 stories tall–doesn’t have an elevator that goes to the top.

The building was originally designed to be 20 stories but builders wanted to construct it further. But unfortunately, the designers forgot to put in an elevator that goes to the 47th floor.

It’s unclear now what will happen with the building, which towers over the other buildings in the city, reported the El Pais newspaper, which saw the contract.

The New York Daily News points out that the building is around 94 percent complete. The construction of the building was originally funded by the Caixa Galicia bank, but it was later taken over by Sareb, known as “the bad bank” in Spain,” according to the European Central Bank, the European Commission and the International Monetary Fund.

The three agencies were focusing on the bank’s toxic estate assets when they made the statement.

But due to bad planning and financial shortfalls–which included not paying construction workers for months at a time in 2010–an elevator wasn’t put in.

The grand opening for the skyscraper was planned for this December and it seems likely that exterior elevators will be set up for the elevator at an extra cost.

According to the Daily Mail, the building was intended to be a sign of prosperity for Spain and Benidorm, a city that is located on the scenic coast.