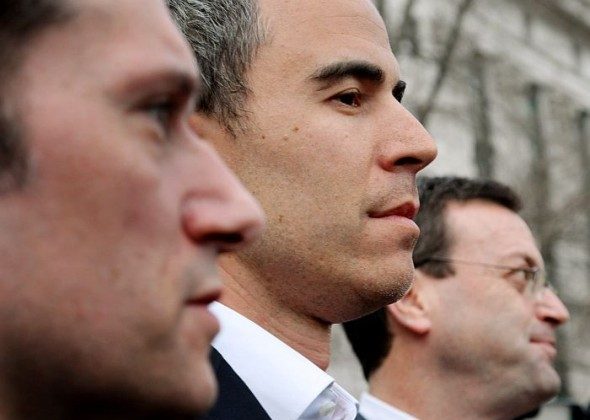 SAC Capital portfolio manager Michael Steinberg (C) walks with his lawyers as he leaves federal court after being arraigned on insider trading charges in New York City. Critics of the SEC are accusing it of being too lax in enforcing insider trading regulations. (Monika Graff/Getty Images)
Business & Economy

The term insider trading is generally associated with illegal trading and has become known through several high-profile cases, such as Martha Stewart’s ImClone insider trading affair. She sold 4,000 ImClone shares just a day before the company’s stock price took a nose dive, according the Daniels Fund Ethics Initiative.

“‘Insider trading’ is a term that most investors have heard and usually associate with illegal conduct. But the term actually includes both legal and illegal conduct. … Illegal insider trading refers generally to buying or selling a security, in breach of a fiduciary duty or other relationship of trust and confidence,” an article on the SEC website explains.

It is legal when a firm’s employees, such as shareholders, executives, and others, purchase and sell stock in their company. However, all insiders must file several Securities and Exchange Commission (SEC) forms.

The SEC has amended insider trading regulations over the past years, making them stronger and inclusive of more entities. Today, relatives, friends, and business associates of those working in a firm may be charged with insider trading after receiving such information and using it to sell or buy stock.

An exception is when the accused person can prove that they had a pre-existing contract, a well-defined plan, or any type of information that was received in good faith.

“A person receiving confidential information under circumstances specified in the rule would owe a duty of trust or confidence and thus could be liable under the misappropriation theory,” an article on the Securities Law website states.

“The SEC obtained an emergency court order in July 2012 to freeze multiple Hong Kong and Singapore-based trading accounts just days after the Nexen acquisition was announced and suspicious trading in Nexen stock was detected,” according to a March 29 SEC announcement.

“This should send a stern warning to anyone contemplating insider trading in U.S. markets from abroad that the SEC uncovers such misconduct and the end result is a severe financial setback rather than a windfall,” said Sanjay Wadhwa, senior associate director at the SEC, in the SEC announcement.

In October 2012, the Hong Kong firm Well Advantage settled an insider trading charge in the Nexen case, agreeing to pay a fine of over $14 million, double the profit they reaped from the illegal activity.

“Michael Steinberg was another Wall Street insider who fed off a corrupt grapevine of proprietary and confidential information cultivated by other professionals who made their own rules to make money,” said Manhattan U.S. Attorney Preet Bharara, in a statement published on the Department of Justice website.

Also on March 29, the U.S. Department of Justice announced that Trent Martin was extradited to New York from Hong Kong. He was charged, along with others, for insider trading concerning the purchase of SPSS Inc. by IBM in 2009.

“With his arrival here to face charges for his alleged conduct, he now knows that the long arm of the law will reach out—even thousands of miles—to hold alleged lawbreakers accountable,” Bharara said in the March 29 announcement.

“Insider buying decreased with insiders purchasing $13.6 million of their stock last week compared to $28.29 million in the week prior,” according to the Insider Trade Reports website on March 22.

At the same time, insiders sold $2.86 billion of stock in the first week of March, while much less, $1.19 billion, was sold on the stock exchange in the second week of March.

“The Sell/Buy ratio this week [ending March 22] compares favorably with the prior week, when the ratio stood at 100.91,” according to the Insider Trade Reports article.

The author uses an adjusted ratio by using insiders who only have a small percentage of ownership (10 percent) and no association with funds or firms.

In the March 22 article, the Insider Trades Reports author reported five insider purchases, starting with Richard L. Duchossois of Churchill Downs Inc., who purchased 16,573 shares at a price of $66.97 per share.

“Several academic studies have been done over the years exploring the outperformance of insider trades and specifically insider buying. These studies have analyzed data over several decades and have shown that insider buying tends to outperform the overall market by 6% to 10.2% per year,” according to the Insider Trade Reports website.

Charges against the SEC are being voiced by critics, according to a mid-March article on the Knowledge@Wharton (KW) website. The article states that critics believe “the agency is too meddlesome, too unsophisticated, too blind to offenses occurring under its nose, too prone to Wall Street influence via a revolving door, too soft on wrongdoers.”

The critics point to a number of violations where the SEC was informed but refused to take action, which includes the Ponzi scam by Bernard Madoff. The article suggests that criminal prosecutors are worried about losing cases and thus go easy on those violating regulations.

But fines against big firms, such as the Goldman Sachs Group Inc. and Citigroup Inc., have been so small that these companies continue with the same violations, pay the fines, and move on.