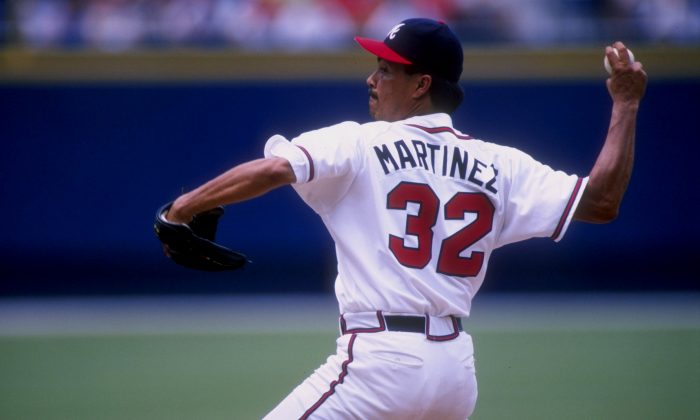 Pitcher Dennis Martinez, aka El Presidente, of the Atlanta Braves in action during a game against the Florida Marlins at Turner Field in Atlanta, Georgia. (Matthew Stockman/Getty Images)
12- OBSOLETE

The words and phrases are spoken and written day after day, year after year—generally without any wonderment as to how they became part of the language. All have a history, a story. For those of you who liked all the other pieces and suggested you wanted more—here is more. As always, reactions and suggestions always welcome.

EBBETS FIELD: On April 9, 1913, the Brooklyn Dodgers played their first game in their new ball park against the Philadelphia Phillies. An account of the event read: “A cold, raw wind kept the attendance down to about 12,000 but did not affect the players, who put up a remarkable battle. Both Tom Seaton (Philadelphia) and Nap Rucker (Brooklyn) pitched brilliant ball, the former just shading the noted southpaw in a 1 to 0 shutout. The opening ceremonies were impressive, the two teams parading across the field headed by a band….Casey Stengel made a sensational catch…. “

The site of the ball park was four-and-a-half acres on the lower slope of Crown Heights in Brooklyn, a filled-in tract of marshy land that the neighborhood people called Pigtown. Ebbets Field originally seated 18,000, with another 3,000 standees able to watch the games. The park had a double-decked grandstand that extended around the right-field foul line virtually to the fence in left field. A small, open bleacher section with concrete seats was located in left between the stands and the field. Beyond right field was Bedford Avenue. It was a confined, intimate, tiny, odd-shaped ball park—and it was a place that on the day it opened became obsolete and needed architectural and seating changes. The man the park was named for was Charles H. Ebbets, who moved from selling peanuts and scorecards to the presidency and primary ownership of the Brooklyn National League franchise. It was his vision that created the fabled ball park.

EEPHUS BALL (EEPHUS PITCH): A specialty of Pittsburgh Pirate pitcher Truett Rip” Sewell, this pitch sort of sailed to the plate in a high, lazy arc that tantalized overeager hitters. With his trick pitch, Sewell won a grand total of 42 games in 1943 and 1944. Sewell explained that he developed the pitch after a war injury made him change his wind-up. He adopted an overhand delivery because he was no longer able to pivot on his right foot.

EIGHTH WONDER OF THE WORLD: On what was once Texas swampland and a wind-swept prairie, the Houston Astros once played baseball in the Astrodome, which many nicknamed the Eighth Wonder of the World. Built at a cost of $38 million, the colossal complex sprawled over 260 acres six miles from downtown Houston. The facility had the biggest electric scoreboard and the largest dome ever constructed. It was the largest clear-span building ever built and the largest air-conditioned stadium ever. The Astrodome had 45,000 plush opera-type seats, from which fans viewed athletic events in the additional comfort supplied by a 6,000-ton air-conditioning system that maintained the temperature in the stadium at 72 degrees. The inspiration for the Astrodome was the Roman Coliseum, built circa 80 A.D., which prodded Judge Roy Hofheinz, president of the Houston Sports Association, the owners of the team, to press for the creation of a domed stadium.

“I knew with our heat, humidity and rain, the best chance for success was in the direction of a weatherproof, all-purpose stadium,” said Hofheinz. Buckminster Fuller, media-famed ecologist and inventor of the geodesic dome, served as consultant to the project. Hofheinz said, “Buckminster Fuller convinced me that it was possible to cover any size space so long as you didn’t run out of money.” They didn’t run out of money and even had $2 million to spare for the 300-ton scoreboard, with 1,200 feet of wiring, that stretches 474 feet across the brown pavilion seats in center field.

“EL DUQUECITO”: Adrian Hernandez, because of a pitching style similar to Orlando.

“EL DUQUE”: Hernandez, the younger Cuban, is not related to his elder countryman.

“EL MAESTRO”: Martin Dihigo, played all nine positions well. The native of Cuba was a star in leagues in Mexico, Venezuela, and Puerto Rico as well as a 12-year-veteran of the Negro Leagues.

“EL TIANTE”: Luis Tiant, a tribute to his Cuban roots and to him.

$11,000 LEMON: In 1908, Rube Marquard was purchased by John McGraw of the New York Giants from the minor league Indianapolis team. The $11,000 paid for Marquard was a record sum paid for a minor leaguer at that time. Since Marquard’s record during his first three years with the Giants was nine wins and 18 losses, McGraw’s judgment was criticized and Marquard was labeled the “$11,000 Lemon.” However, in l9l l the left-handed pitcher rewarded McGraw’s patience and showed that the Giant manager’s judgment was correct by achieving a record of 24-7. The next year his record l 9 consecutive victories powered the Giants to the National League pennant. And there were those who then called him the “$11,000 Wonder.”