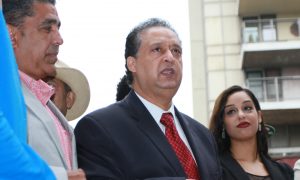 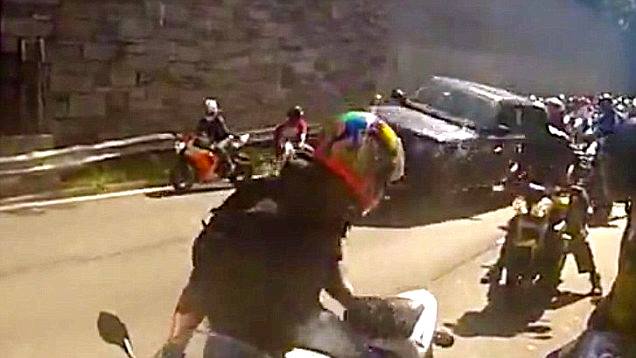 The SUV in this screenshot is running over Edwin Mieses Jr., also known as Jay Meezee. (YouTube screenshot)
Crime and Incidents

NEW YORK—A man from Lawrence, Mass. lies in a coma in a New York City hospital, possibly paralyzed for life. He was run over by an SUV on Henry Hudson Parkway Sunday while riding his motorcycle.

What happened before the car hit him is not clear. There is a video, taken by one of the motorcyclists and uploaded to YouTube, but the video is out of focus and too far away from the incident to come to certain conclusions.

The man was part of a group of bikers who were in town to hold an event without a permit. According to the video, they surrounded the black Range Rover on Henry Hudson Parkway while still in motion. One of the bikers then slowed down in front of the SUV, causing the two vehicles to collide.

After the incident, the bikers and the SUV stopped. The bikers seemed confused, many motionless, watching to see what was going on. The video shows one biker, who was at least 16 yards from the SUV, get off his bike and walk toward the vehicle. What was happening around the vehicle at the time is not clear from the video, but police said that bikers had started to damage the car.

At that moment, the SUV driver suddenly drove forward, hitting biker Edwin Mieses Jr., who goes by the name Jay Meezee. Mieses’ legs were broken, and according to his family he has spinal injuries.

On a Facebook page titled “Justice for Jay Meezee,” his aunt, Delilah Domenech said the video showed he had witnessed an accident (the collision) and got off his bike to help the biker that had been hit.

“He was on the ground attending to an injured person and was run over like an animal,” she said.

The page has received thousands of comments, most of them negative.

Vincent Tona, a New Yorker, who watched the video on YouTube, said, “Why was Jay getting off his bike to go help his friend. … when his friend was still riding his bike after it made contact with the RR? Why would he get off his bike if an accident never actually happened? Pause and see [the other biker] at 0:30-0:31 still riding. … Jay got off his bike to join the gang in terrorizing the man and his family…”

After the car had hit Mieses, the bikers then chased the SUV a few miles up the road to 174th Street and started to beat up the driver.

People from all over the US and even as far away as Germany, expressed their anger over this incident.

Who is the Victim?

The Justice For Jay Meezee page administrator responded to a host of negative comments by saying: “The media is trying to paint the man driving the Range Rover as the victim. Yet, Jay Meezee is in a coma and paralyzed unable to walk again along with a list of severe injuries sustained.”

Stacy Ortego, from Baton Rouge, Louisiana, said “Where have you read that he was trying to harm anyone? Because, I sure haven’t seen it. Or are you just assuming that because he’s a biker?”

Augustus Chang said, “Jay Meezee was driving without a license and previously ticketed 16 times in several different states. Look at these videos … They were uploaded by Jay Meezee himself and shows him running red lights, driving dangerously and antagonizing other drivers on the road. I’m not sure what a ‘family man’ would be doing putting himself and others at risk like this.”

Dante A Milton commented on the whole discussion: “I find the remarks in response to this accident to be offensive, inhuman, and so far removed from the example of how we are supposed to be carrying ourselves.”