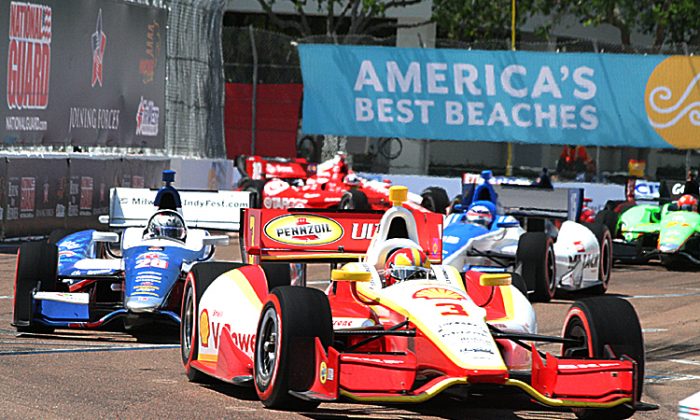 Helio Castroneves speeds through the streets of St. Petersburg. IndyCar will be bringing its intense street-racing action to Houston starting in 2013. (James Fish/The Epoch Times)
Motorsports

IndyCar Returning to Houston in 2013

After a five-year hiatus, IndyCar will be returning to the streets of Houston in 2013 for the Shell and Pennzoil Grand Prix of Houston.

IndyCar CEO Randy Bernard and Mi-Jack Promotions principal Mike Lanigan (co-owner of the Rahal-Letterman-Lanigan IndyCar team) have been negotiating for a year to bring IndyCar back to America’s fourth largest city. IndyCar (then Champ Car) raced in Houston’s Reliant Park in 2006 and 2007 as part of very successful race weekends.

“When we look at growing our schedule, one of our top objectives is to showcase our racing in major U.S. cities, which in turn helps our sponsors, team owners, and television package and is key to the success of our sport,” said Bernard in and IndyCar.com article.

“As the fourth largest city in the country, Houston is a great fit for the Izod IndyCar Series and Reliant Park will be a tremendous venue.”

The race might serve as the season finale; the 2013 schedule has yet to be finalized.

The promoters have signed a five-year contract with Shell and Pennzoil as title sponsors, guaranteeing the race will have the budget and the longevity to create a following.

“Shell has built a long, storied history in motorsports across the world,” said Lisa Davis, president of Shell Commercial Fuels and Lubricants Americas. “Becoming the title sponsor for the IZOD IndyCar Series race lets us bring the Grand Prix home to enjoy with our customers, employees, and neighbors.”

The 2006 and 2007 races in Reliant Park each brought an estimated $35 million in economic activity to the region, and gained significant publicity for the Houston area. This prompted then-Mayor Annise Parker and Judge Ed Emmett to create the Grand Prix Local Organizing Committee in 2010, with the aim of lining up a title sponsor and bringing racing back to Houston.

The 10-turn, 1.7-mile course will be laid out in Reliant Park, as it was for past events. Organizers are planning a three-day event, with a variety of family friendly activities to complement the on-track action.

Penske Racing driver Helio Castroneves, winner of the IndyCar season opener on the streets of the St. Petersburg, Fla., spoke at the press conference announcing the new event.

“It’s always fun to put on a great show in front of large crowds, and with Houston being a gateway to Central and South America it’s important for the series’ Latin America audience to have the opportunity to experience these urban festivals that always have a fun and exciting atmosphere,” he said according to IndyCar.com.