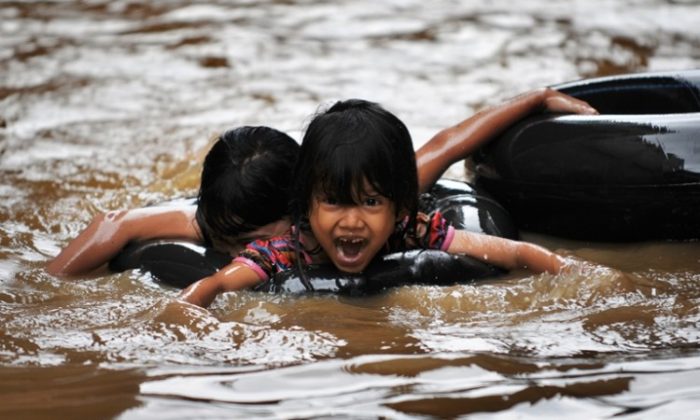 Children paddle with an inflatable ring through floodwaters in front of their houses in Jakarta, Indonesia on Feb. 18, 2010. A new bout of flood waters submerged Jakarta on Dec. 24, 2012, affecting so far 10,250 families. (Bay Ismoyo/AFP/Getty Images)
World

Torrential rains, which flooded major thoroughfares and submerged thousands of homes in the Indonesian capital of Jakarta over the weekend overtake more homes with each subsequent hour. Though the area is prone to flooding, authorities say this is beyond anything they had prepared for, and Jakarta cannot be sufficiently protected.

Indonesia is rated one of the top first five countries most frequently hit by natural disasters over the last decade. Flooding began in its West Java area Saturday with extraordinarily heavy rains that cause the Ciliwung River, usually 20 inches (50 cm), to swell to 47 inches (120 cm). On Sunday morning, the waters reached south Jakarta, and by Monday afternoon much of the capital had been inundated.

In some parts of east Jakarta, such as Kampung Pulo and Kampung Melayu, water depth reached 8.2 feet (2.5 m).

As of Monday afternoon, no casualties had been reported, but the severity of the situation is increasing.

“The dimensions and the problem of flooding in Jakarta continue to increase,” reads a statement of BNPB released Sunday.

The agency explained that before the 1970s, the dominant factors for flooding were natural causes. But later, the causes became more complex, combining natural and anthropogenic factors.

“This doesn’t happen a lot, so the pumps could not handle it,” Ery said.

Jakarta authorities have so far identified 78 areas at risk of being flooded. There are several government initiatives to solve the flooding problem, but they will likely be insufficient.

Even if all the planned protections for the future were already in place, it would be difficult to cope with the current levels of flooding.

The Jakarta Emergency Dredging Initiative will address flooding in 20 areas by dredging 13 rivers between 2013 and 2014. Another effort scheduled to finish in 2014, the dredging of the Pesanggrahan River, the Angke River, and the Sunter River, would only solve the flooding problem in 10 areas.