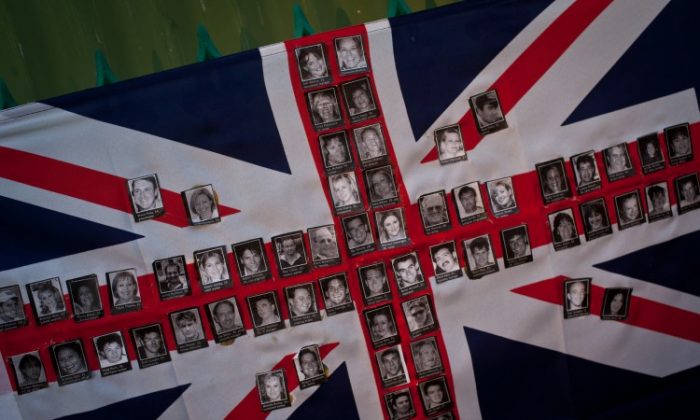 An Australian flag made up of photographs of victims of the 2002 bomb blast is seen on a fence at the site of the Sari Club in Jalan Legian, Bali, on Oct. 10, 2012. Many relatives and foreign tourists have begun to arrive to take part in ceremonies marking the 10th anniversary of the bomb attack in the Kuta tourist district. (Chris McGrath/Getty Images)
World

Indonesian authorities warned on Wednesday of a possible terrorist threat related to the 10-year anniversary of the deadly bombings on the island of Bali that killed scores of people.

The Oct. 10, 2002, bombings of nightclubs killed 202 people, many of which were tourists from Australia and other foreign nationals. Eighty-eight Australians were killed in the attacks.

“Based on credible information, the terrorists have planned to target the Bali bombing commemoration event with a terror attack,” Bali’s deputy police chief, I Ketut Untung Yoga Ana, told AFP. “Security at all entry points to Bali, such as airports and seaports will be intensified,” he added.

Indonesia had announced that security for the commemoration events would entail around 1,000 personnel including snipers.

Australian Prime Minister Julia Gillard and other officials are slated to attend the event.

“Families will be traveling there. It will be a day in which we pay our respects and remember what that moment was like for Australians,” Gillard said, reported The Australian.

The bombings were carried out by al-Qaeda- affiliated Jemaah Islamiyah, of which 700 members have been jailed or killed since the bombing, reported Sky News.

Gillard recently said the Bali bombings were “a moment of horror that had a profound effect on Australia as a nation,” according to the broadcaster.