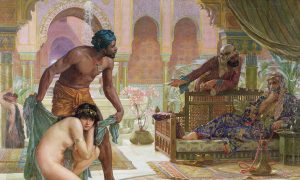 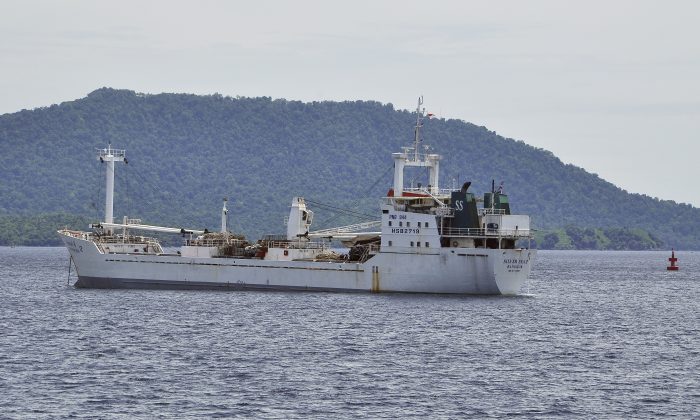 JAKARTA, Indonesia—A massive refrigerated cargo ship believed to be loaded with slave-caught fish was seized by Indonesia’s navy and brought to shore Thursday, officials said, after The Associated Press informed authorities it had entered the country’s waters.

The Thai-owned Silver Sea 2 was located late Wednesday and escorted about 80 miles (130 kilometers) to a naval base in Sabang on the Indonesian archipelago’s northwestern tip, said Col. Sujatmiko, the local naval chief.

The AP used a satellite beacon signal to trace its path from Papua New Guinea waters, where it was also being sought, into neighboring Indonesia. The navy then spent a week trying to catch it. The ship was close to leaving Indonesian waters by the time it was finally seized.

“I’m so overwhelmed with happiness,” said Fisheries Minister Susi Pudjiastuti, adding it was difficult to find because the boat’s signal had a delay. “It was almost impossible, but we did it.”

The Silver Sea 2 is the same 2,285-ton vessel captured in a high-resolution satellite photo last month in Papua New Guinea showing its hold open and two fishing trawlers tethered to each side, loading fish.

The smaller wooden vessels were identified by analysts as the ones that fled the remote Indonesian island village of Benjina earlier this year, crewed by enslaved men from poor Southeast Asian countries who are routinely beaten and forced to work nearly nonstop with little or no pay.

An AP investigation revealed their catch reached the supply chains of major U.S. food sellers, such as Wal-Mart, Sysco and Kroger, and American pet food companies, including Fancy Feast, Meow Mix and Iams. The businesses have all said they strongly condemn labor abuse and vowed to take steps to prevent it.

Pudjiastuti freed hundreds of men earlier this year after the AP exposed they were trapped — including some locked in a cage — on Benjina. But 34 boats loaded with slaves escaped before authorities arrived. They remain missing. Seven arrests have been made in Indonesia and two in Thailand related to the case.

An official at Silver Sea Reefer Co., which owns several refrigerated cargo ships in Thailand, on Thursday denied that the Silver Sea 2 had been seized, and said its business was not connected to human trafficking.

“We have received numerous calls from Thai agencies … asking about this and basically we said we have never done anything like it,” company manager Venus Pornpasert said. He added that all of the ships’ crews are Thai nationals and certified by the International Maritime Organization.

The Indonesian navy has so far declined to comment on the crew found aboard the captured vessel.

Pudjiastuti, who put a moratorium on all foreign boats last year to crack down on rampant poaching, said the Silver Sea 2 captain will be questioned, and an investigation will be launched into suspected human trafficking, transport of illegally caught fish and transshipment, which involves offloading fish at sea. It allows fishermen to work for months without returning to port, making it easier for their captains to exploit them.

“Indonesia’s action here is significant as it demonstrates a commitment to enforcing the actions of vessels within their waters, regardless of whether they are fishing illegally or trafficking labor,” said Tobias Aguirre, executive director of California-based nonprofit Fishwise, which advocates for sustainable, slave-free seafood.

Authorities in Papua New Guinea had also been searching for the boat. They instead seized another Thai-owned fish cargo ship, the Blissful Reefer, two weeks ago. Two trafficked Burmese and six Cambodians were found on board.

Workers who recently returned home to Myanmar after being enslaved on one of the trawlers that fled to Papua New Guinea said they regularly loaded fish onto Silver Sea cargo ships, which ferry the catch back to Thailand, where it was processed and fed into the country’s $7 billion annual seafood export business.

The industry depends on the labor of poor people from its own country and migrants from Myanmar, Cambodia and Laos who are often sold, kidnapped and tricked onto trawlers.

Black Friday Caused by Slavery? Nope, ‘Stemmed From The Sale Of Slaves After Thanksgiving’ Totally Fake

The White Slaves of Barbary

In addition, Burmese slaves rescued from Benjina, who were among hundreds interviewed by AP in person or in writing, said they were trafficked in Thailand and brought to fish in Indonesia aboard the Silver Sea 2 with no way to return home.

Indonesian police also are investigating trafficking claims involving 45 Burmese fishermen who were rescued from a Jakarta hotel last week. Arie Dharmanto, who heads the anti-human trafficking unit of the National Police, said the men had fake documents identifying themselves as Thai, and that officials from two Indonesian companies have been questioned about their role.