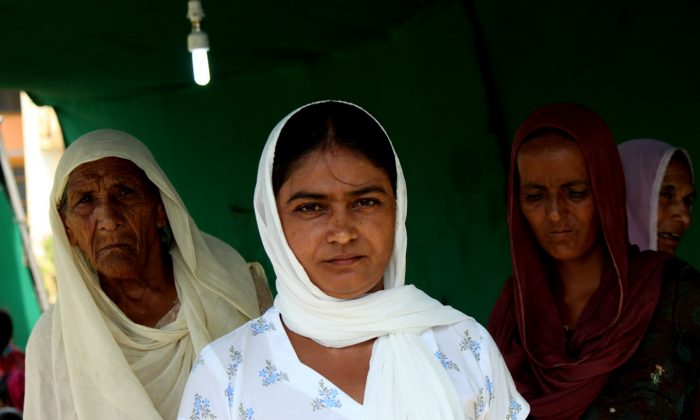 A widow who lost her husband few months ago, standing at a relief camp at the government high school, Dablehar, in Jammu. Aug. 28, 2014. (Venus Upadhayaya/Epoch Times)
India

Indians Flee to Army Camp to Avoid Gunfire From Pakistan

DABLEHAR, India—Gurbachno Devi, 58, has been tormented by Pakistani army’s continuous shelling of her small village in northern India, near the Pakistan border. Now she has taken shelter in a camp set up by the Indian army three miles away.

“Such huge shells are falling that we feel like crying. Our children are at relatives’ homes, our men are at our homes (at the border), and we are here,” Devi said.

Around 250 elderly women, men and children are staying full-time in tents set up on the grass outside a secondary school in Dablehar village. At night, the number of refugees rises to as many as 700.

Gurbachno Devi, 58, at a relief camp at the government high school, Dablehar, in Jammu. Devi is tormented by continuous firing from across the border with Pakistan. Aug. 28, 2014. (Venus Upadhayaya/Epoch Times)

In the mornings, many of the women travel home to cook food for the men and feed the cattle.

“We asked the government to have a full-fledged war for once so we can we die and our problems will be over,” said Devi, “or else to consider our needs and give everyone a small piece of land in a safer location.”

Devi is from a village called Nikowal less than a mile from the Pakistani border. She and her family would be willing to relocate further away, but they can’t afford it on their own.

“The rich people retreat to safer locations. But it’s the poor who suffer and get shot at because they have nowhere to go,” Devi said.

Adding to her difficulties, the local government has disconnected Nikowal village’s electricity because lighted homes at night are easy targets.

“We and the children have to hide indoors in the dark with no power supply. The children feel suffocated and start crying loudly,” she said.

Children at a relief camp at the government high school, Dablehar, in Jammu. All schools are closed in the Indian villages along the border with Pakistan due to the frequent gunfire. Aug. 28, 2014. (Venus Upadhayaya/Epoch Times)

On Wednesday, India lodged a protest with Pakistan in the first high-level military contact since the intense firing began a month ago. The Border Security Force of India and the Rangers of Pakistan held a meeting about 20 miles from the camp where Devi is staying.

Two Indian civilians were killed early Saturday morning after the Pakistani army began its shelling at about 1 a.m. Two civilians on the Pakistani side were also killed when the Indian army returned fire. All four victims were from the same tribe (Gujjar) and spoke the same dialect (Gojri).

Pakistan and India have gone to war four times since 1947. They signed a ceasefire treaty in 2003, but Pakistan has frequently violated it.

India is hoping to put an end to the conflict as quickly as possible.

Chowdhary Roshan Lal, 66, who is also camping at Dablehar, says even after the ceasefire resumes, it will take time for life to return to normal.

“Our standing crops are spoiled,” said Lal. “The ceasefire might happen today or tomorrow but our damaged crops can’t come back. What will we eat?”