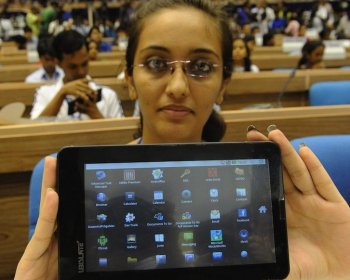 As the popularity of tablet computers such as the Apple iPad and Amazon.com’s Kindle Fire continues to soar, competitors have devised similar products for the lower end of the market.

The most economical tablet was announced this week and will be sold in India at a subsidized price as low as $35. The tablet computer, known as the Aakash, is produced in New Delhi, India, by the U.K.’s DataWind Ltd. The tablets are being purchased by the Indian government in order to target the student market.

The name of the tablet translates to sky in Hindi. The devices will be distributed to students at a cost of $35 under a government subsidized initiative called National Mission on Education through Information & Communication Technology. There were 500 devices given away to students during the launch by the country’s minister of Communications and Information Technology, Kapil Sibal.

The 13-ounce, book-sized tablet is based on the Android operating system, and includes Internet navigation, video conferencing, two UBS ports, a three-hour battery life, as well as e-book reader functionality. India has committed to 100,000 orders in the trial stage of the program. The government intends to eventually distribute 10 million Aakash devices over a few years time.

"Today we reach to the sky and demonstrate what is possible," said Sibal. “The rich have access to the digital world, the poor and ordinary have been excluded. Aakash will end that digital divide."

A version of the device will be sold at retail for around $60 under the name “UbiSlate” starting in December. The Indian government’s cost per unit is reported to be around $50, at least at the outset, and the product has taken two years to develop.

“Our goal was to break the price barrier for computing and Internet access,” said Datawind CEO Suneet Singh Tuli in a statement. “We’ve created a product that will finally bring affordable computing and Internet access to the masses. This is not only a concept that applies to India, but has ignited the imaginations of governments around the world.”

There has been some controversy reported about the tablet in India, as some question if this is a good use of government money, considering that many poor schools in rural areas still lack basic sanitation and teachers.

The current model is “Made-in India,” according to Singh, and initial critical feedback of the tablet included the device’s slow response time and the fact that it can only access the Internet via Wi-Fi, which means no wireless Internet capabilities away from hotspots.