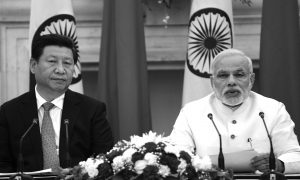 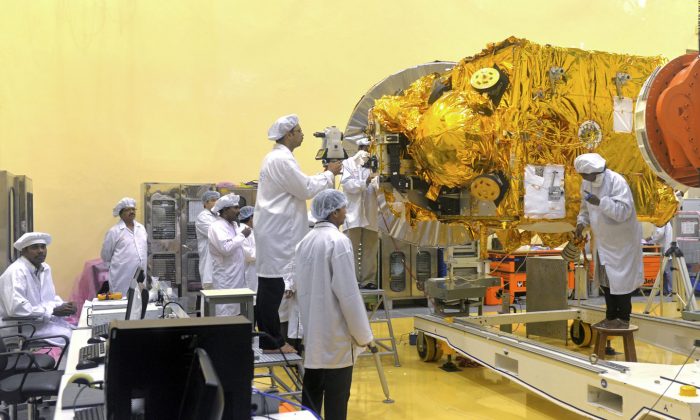 Scientists and engineers work on a Mars Orbiter vehicle at the Indian Space Research Organization’s (ISRO) satellite center in Bangalore on Sept. 11, 2013. India is slowly increasing its technology in space, both for the civilian purposes and increasingly for military purposes. (Manjunath Kiran/AFP/Getty Images)
India

NEW DELHI—India launched an unmanned rocket into space Thursday morning. At 700 tons, it is the heaviest load India has ever successfully launched with its own technology. It was a test run for what the country hopes will put their astronauts and heavier satellites into space.

The chief of the Indian Space Research Organization (ISRO), K. Radhakrishnan, called it a “very significant” day in India’s history.

India’s space programs have mostly been civilian in nature for research, navigation, communication, and other tasks.

But the country is slowly shoring up dual-purpose space technology that would greatly enhance its military capabilities in space.

“We are developing a regional navigation system—both for civil and strategic purposes,” said Ajey Lele, a research fellow at the Institute for Defense Studies and Analysis in New Delhi. “Space is a dual-use technology.”

In 2012, India tested its Agni V ballistic missile, launching it 370 miles into space. The propulsion technology of the Agni V showed that India could also quickly launch defense missiles that could destroy foreign missiles—inside and outside Earth’s atmosphere—and that could also take down a satellite, according to the chief of India’s Defense Research and Development Organization (DRDO).

India is developing its next generation of the Agni missile, the Agni VI, which is supposed to have a longer reach and the ability to be launched from land and sea, according to a DRDO newsletter.

“Some of these capabilities that we are building will have spin-off benefits for the security domain,” said Dr. Rajeswari P. Rajagopalan, a senior fellow at the Observer Research Foundation in New Delhi.

Satellites, for example, can be used for both navigation and spying.

Last August, India launched its first satellite exclusively for the navy, which will help with navigation, reconnaissance, and precision in guiding missiles. ISRO says it plans to build one for the army and the air force next.

In 2007, China conducted an anti-satellite (ASAT) test that shot down one of its old weather satellites. It raised concerns in India, and the international community, prompting India to start developing its own strategic military space capabilities.

“Our satellites are vulnerable to ASAT weapon systems because our neighborhood possesses one,” said India’s Air Chief Marshal P.V. Naik in 2010.

According to the head of DRDO, the Agni V was the first step in creating India’s own anti-satellite program, but unlike China, India does not plan to shoot down a satellite to test it.

“We don’t want to weaponize space but the building blocks should be in place, because there may come a time when you may need it,” Vijay Kumar Saraswat told India Today. “We will not do a physical test [actual destruction of a satellite] because of the risk of space debris affecting other satellites.”

After India’s successful Mars mission in September, it announced plans to put a rover on the moon and a satellite near the sun to study its corona. If successful, it would be the country’s second mission to the moon.

Just a month before, China completed a mission to the moon, which raised questions of whether the two countries were in a space race. But ISRO Chairman K. Radhakrishnan said that was not their priority.

“We don’t race with any country. We have our own priorities,” Radhakrishnan said, the AFP reported.

Rajagopalan, however, believes that the ISRO leadership has downplayed competition.

“The reality is that there’s a sort of competition and the Chinese do get that message very clearly,” she said.

India is slowly increasing its own capacities in space, whether because of China or for its own strategic goals, and Rajagopalan says that, either way, it will be good for India.

“There are efforts being taken up to formulate new rules of the game, how outer space activities should be guided,” she said. “And if India has to have an influencing role in some of these global mechanisms, I think it also needs to do a bit of sound and light show every now and then to show that India is a capable power.”