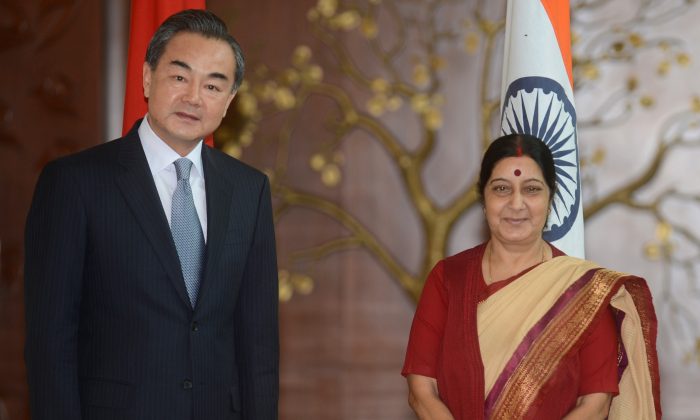 Visiting Chinese Foreign Affairs Minister Wang Yi (L) and Indian Minister for External Affairs Sushma Swaraj (R) in a meeting in New Delhi on June 8. On Sept. 15, Swaraj asked China to recognize a ‘One India Policy’ if it wants India to recognize a ‘One China Policy.’ (Raveendran/AFP/Getty Images)
India

“When they raised with us the issue of Tibet and Taiwan, we shared their sensitivities. So, we want them to understand and appreciate our sensitivities regarding Arunachal Pradesh,” Swaraj said last Monday in New Delhi, according to multiple media reports.

The One China Policy refers to the People’s Republic of China (PRC) seeking recognition as the only government of Taiwan, and the Tibetan region.

During Wen Jiabao’s visit to New Delhi in 2010, India’s last government removed reference to the One China Policy from a joint statement, and has not formally recognized it since.

However, India does not have formal diplomatic relations with Taiwan, and even though India is home to the largest number of Tibetan refugees, the Dalai Lama, and the Tibetan government-in-exile, it has politically accepted Tibet to be a part of China.

The PRC considers the Indian–administered state of Arunachal Pradesh, in eastern India next to Bhutan, as part of south Tibet and refuses to accept it as India’s territory. In the past few years, Chinese incursions into the Indian–controlled territory of Ladakh in the very northeast of the country have increased, both of which are matters of great concern for India.

Swaraj brought up the issue earlier when her Chinese counterpart Wang Yi, visited India in June this year.

“It was almost a kind of threat from the foreign minister: that if you disregard the One India Policy, India may revise its One China Policy. … Of course she was not making it too explicit, but I think even the Chinese could have read between the lines,” said Ashok Behuria, strategic analyst at Institute for Defense Studies and Analyses in New Delhi.

Since Narendra Modi came to power in May, the country’s foreign policy has become more active, and Modi’s government has not shied away from asserting India’s territorial concerns both to China and Pakistan.

“At the moment when Modi came to power, he said ‘Enough is enough, we have to revise our (Pakistan) policy.’ They have revised it. So in that sense China must have taken notice,” said Behuria.

While Modi has emphasized better economic relations in the region and will try to bring in a lot of Chinese investment during Xi’s visit, he is expected not to compromise on issues of India’s territorial integrity.

“Being pragmatic, Modi has already indicated that his foreign policy would be based on reciprocity,” said Dr. William Nunes, a foreign policy analyst based in Modi’s home state Gujarat.

Xi is on a diplomatic tour of Tajikistan, the Maldives, Sri Lanka, and India from Sep. 12–19. He is expected to be in India around the Sept. 17.