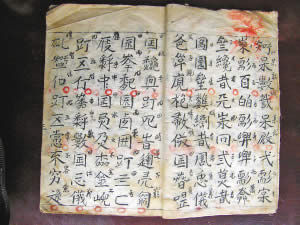 Mysterious ancient books found in Chongqing. For the past two years no one has been able to read them. (Epoch Times screen shot taken from 21 cn.com)
China

Chongqing Morning Post published a report on February 15 about the story of Zhou Yongle, 38, a resident in Youyang Tujia and Miao Autonomous County. In the winter of 2006, Zhou arrived at Yiju Town to purchase antiques. He bought a pile of old books from a farmer and took them home. When he was tidying up the purchased books, an ancient book bound with thread drew his attention.

This special ancient book was made up of over twenty pieces of parchment that was commonly used in the Wuling Mountain Area. Characters vertically arranged on the parchment bear a striking resemblance to traditional Chinese characters. Written with brushes, the handwriting is neat and strong. Much to his amazement, he could not recognize any of the words. He was left dumbfounded.

Zhou Yongle consulted such Chinese classics as the Shuowen Jiezi [1], Bronzeware script [2], and the Kangxi Dictionary [3]. With an eagerness to figure out the meaning of each character and the name of the writing system, he consulted cultural experts from the Ethnic and Religious Affairs Commission of Youyang County, and also local seniors, but to no avail. None were able to read the strange characters.

That's not the end of story. In the spring and summer of 2007, residents in the ancient town of Gongtan were all evacuated due to construction on the Wujiang Hydropower Station. Zhou went to an old house to again purchase antiques. Suddenly, a coverless old book caught his eye: characters on this book were exactly identical to those on his first discovered book.

After buying the book, Zhou thoroughly examined it and found that it was an ancient book used as a dictionary, with pages combined with thread and characters vertically arranged. Written with brushes, it was composed of big characters similar to those of his previous ancient book. Smaller Chinese characters beneath the content words served as footnotes. Comparison of the two books revealed that characters of the two books belonged to the same writing system, along with footnotes presented in Chinese characters. Based on the resemblance, Zhou concluded that the two books were written in the same language.

Zhou commented, “The Tujia are widely recognized as an ethnic minority with its own spoken language, but without its written language. If we could unravel the mystery of these undecipherable books discovered along the Wu River, and if we could prove they are words used by the Tujia, that would be a great discovery for the Tujia culture. Then the history of ethnic minorities would be revised.”

So far, this kind of mysterious writing system, said Zhou, has been found only in Youyang County. Traces have never been spotted in any other areas.

[1] The Shuowen Jiezi was an early 2nd century CE Chinese dictionary from the Han Dynasty. It was the first comprehensive Chinese character dictionary.

[3] The Kangxi Dictionary was the standard Chinese dictionary during the 18th and 19th centuries. The Kangxi Emperor of the Qing Dynasty ordered its compilation in 1710 and it was published in 1716. The dictionary is named after the Emperor's era name.