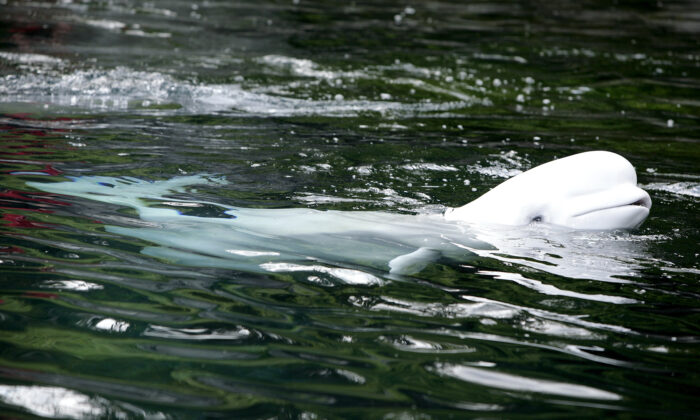 The beluga whale isn’t the first animal people think of when they picture creatures that mimic human speech. But for journalist and nature enthusiast Paul English, an above-water song to the aquatic creatures resulted in the auditory experience of a lifetime.

English was out kayaking one day in November 2017 when he spotted a group of beluga whales out in the water.

Hoping to draw them closer for a better look, English decided to sing the creatures a song.

“Beluga! Oh ah said oooh beluga!” he chanted, hoping his tunes would make the animals curious enough to drift towards his boat. Sure enough, they started floating his way, and that’s when the real fun began.

I went into the sea off #churchill #Manitoba and sang with the #beluga #whales. They’re fans of The Flaming Lips. @TravelManitoba https://t.co/nBWPVLkVeF pic.twitter.com/xdTsgyWaYQ

To English’s delight, the whales began to circle his kayak, bumping the sides and swimming around and under the raft to interact as best they could with the source of their new song.

Hoping to give them more interaction, he donned a snorkeling mask and hopped into the water—and to his surprise and amazement, the animals began to sing right back to him!

Caught on video, the whales gave a chant of their own, clicking and whistling back at English to respond to his initial song.

English told The Sun: “Known as ‘sea canaries’, they even seemed to joined [sic] in with an underwater cacophony of squeaks, clicks and whistles, coming from the bulbous ‘melon’ on their heads (they have no vocal chords) before drifting out of sight, back into the icy depths.”

The whales followed English for an hour.

It was beyond his wildest dreams, but for beluga whale enthusiasts, the experience may not be as surprising as it seems.

Alluding to his experience, English said: “Even if nobody’s getting a record deal from the experience, my days singing with the belugas are days I’ll never forget.”

As per The National Geographic, beluga whales are found in the seas around Canada, Alaska, and Russia. These sea creatures can live both in seawater as well as freshwater and can grow to over 6 meters.

In 1984, a captive beluga whale named Noc told a diver in his tank to get “out, out, out.” It turned out the dolphin-esque creatures share more than just a physical similarity with their fellow waterborne creatures; while beluga whales and dolphins aren’t actually related, they both boast the ability to mimic aspects of human speech.

Beluga whales are less likely to do so, and there are mixed reviews among the scientific community regarding just how long it can take to familiarize the whales with human speech patterns to incite the mimicry.

As English showed, though, it’s clear that the animals are more than willing to attempt to communicate when they feel there’s a budding friendship to be had.

While the cameras rolled, English and the whales held a nice back-and-forth concert of song, with the journalist singing to the animals and them responding in kind in a bonding experience he won’t soon forget. What a magical encounter!