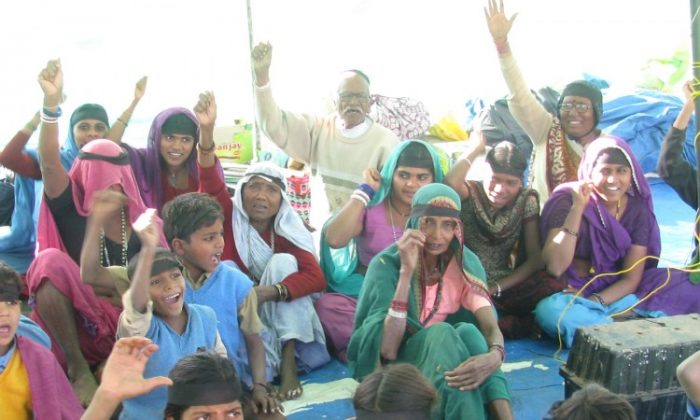 People sit in a tent built on an occupied a piece of government land in Jobat in Madhya Pradesh State, India, to protest not receiving the land they were promised when their villages were submerged in India’s largest dam project. (Courtesy of Narmada Bachao Andolan)
World

In the Shadow of India’s Largest Dam

JOBAT, India—Ousted from their lands, and forced to give up their traditions, tribal people in the India’s Madhya Pradesh State have taken a stand. Since November, they have set up camp on a patch of government land and resumed their traditional life in a gesture of protest against broken promises—promises that they’d be moved to appropriate land after theirs was submerged in India’s largest dam project.

Since 1979, the Indian authorities have been working on the Narmada Dam project. It consists of a staggering 3,200 dams built along the Narmada River—the third largest river within India, and the customary boundary between the north and south of the country. The centerpiece of the project, expected to be completed in 2025, is a single 4,000-foot concrete dam.

For decades the project has been marred with controversy over the resettlement of those who lost their villages and livelihoods. While promised fertile land, many of the displaced tribal people say that is not what they received.

According to Shrikant, of Narmada Bachao Andolan— a social movement consisting of tribal people, farmers, and environmentalists against the Narmada Dam project—Indian law stipulates that those who have been dislocated by the dams are entitled to land that is cultivable and near basic amenities.

Indian authorities say that the dam is a valuable source of water and electricity for the region. “Against one tribal displaced, seven tribals would get benefits,” reads the official website of the dam project.

Forced away by rising waters, many of the tribal people moved to higher ground, which is harder to cultivate. The rocky terrain can only be cultivated for about 1.5 months out of the year. The areas are also isolated because roads are now submerged, leaving villages only accessible by boat.

With no other sources of income, the tribal people have been dependent on government provisions for food. A family of six people is given 10-15 kilograms (22-33 pounds) of food per month, mostly wheat and rice, which activists say is insufficient.

“Our land and houses have been submerged for the past 15 years. We had to sell our goats and buffaloes to live and for the past 5 years we don’t even have cattle assets. Life has become very difficult and many times we have had no money to buy food,” said Surbhan, 39, who came to live at the occupied farmland with his wife and parents.

Angered by not having received the appropriate land as promised by the authorities, a community of about 130–150 people now live and farm on 87 acres of land normally used by the government for agricultural research.

The site consists of a large tent and family members take turns looking after the livestock and small children. The “activists” range from small children to 80-year-old men.

Activists said they have resorted to the occupation as a last option. They said that the authorities have published “fraudulent” data claiming that the resettlement of the displaced has been completed.

In the first few days, police came to the protest site, but no action was taken. However, water and electricity have been cut off by authorities, forcing the tribal people to carry buckets of clean water from a well one-third of a mile away—their only water source.

“We are sitting here for our rights and will be here till we get proper land in compensation. We cannot live without it,” said Surbhan.