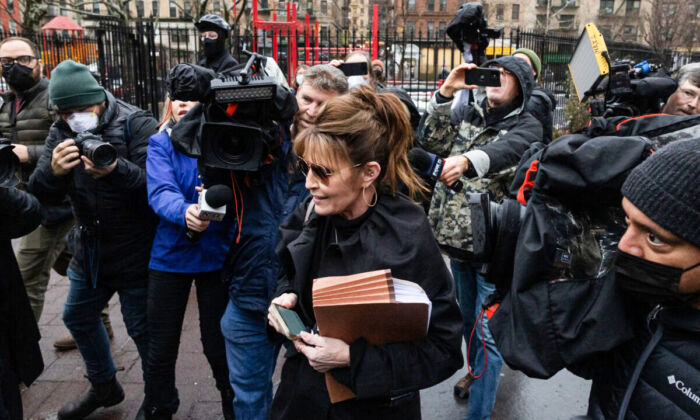 Members of the press surround former Alaska Gov. Sarah Palin as she leaves the federal court in New York, on February 3, 2022. (Yuki Iwamura/ AFP)
US News

NEW YORK—On Feb. 7, at the end of the third morning of former Alaska Gov. Sarah Palin’s libel trial against The New York Times, U.S. District Judge Jed Rakoff began asking his own questions of a witness.

On the stand was Eileen Lepping, a researcher and fact-checker at the newspaper, who worked on the editorial at the heart of the lawsuit.

Lepping already had given her testimony under direct and cross-examinations when Rakoff, who is presiding over the case, started asking her detailed questions.

In the published editorial, a sentence began with, “The link to political incitement was clear,” and ended with a hyperlink to the map Palin’s political action committee (SarahPAC) had distributed with crosshairs superimposed over districts of Democrats.

Lepping had previously testified she hadn’t included this in her fact-checking.

“Was this an oversight?” Rakoff asked her.

She replied it was “a combination of things.”

Palin is accusing The NY Times of connecting her with two mass shootings, one of which involved then-U.S. Rep. Gabby Giffords (D-Ariz.) which happened several years before the editorial was published, and the other which happened that day.

The judge read a portion of another sentence from the following paragraph that began, “Though there’s no sign of incitement [in the current shooting] as direct as in the Giffords attack,” which he interpreted as an assertion that there’s a “direct link” between the map and the first shooting.

Rakoff asked Lepping why she didn’t fact-check this. She said she did to the best of her ability.

Previously, Lepping testified she also was tasked with finding any hate speech against Democrats from before the first shooting.

Earlier in the day, Phoebe Lett, a research assistant for the NY Times’ editorial board at the time, testified that she was given the job of finding previously published editorials that dealt with the shootings of politicians.

Using two search engines, including an internal one called “Times Past,” the first batch she found included four such pieces, which she forwarded to Elizabeth Williamson, the writer of the first draft of the editorial, as well as the editorial board.

In addition to the four, she found an opinion piece on the subject written by Frank Rich, which she forwarded as well.

After a little more research, she found two more pieces worth forwarding.

Lett testified that she wasn’t responsible for the main fact-checking; that task was assigned to Lepping.

Under cross-examination, Lett said she wasn’t asked by Williamson, editor James Bennet, or anyone on the editorial board to research if Palin had any role in the Giffords shooting, and no one suggested blaming Palin. She also testified that no one asked her not to fact-check the piece.

A short time ago, Lepping tested positive for COVID-19 and had more recently tested negative, but gave her testimony via a video feed.

Under cross-examination, Lepping testified that she couldn’t determine if the shooter in the Giffords attack was motivated by the crosshairs map.

The judge reminded both sets of lawyers of courtroom procedure a few times, as he has in the past.

Linda Cohn, an editor at the NY Times on the day the editorial was written and published, testified that the piece was to “address two themes”: gun control and the state of political rhetoric.

Cohn said she was assigned to the editorial late in the day, and after reading Williamson’s first draft, said she “felt a little unsure” regarding “if it addressed both sufficiently.”

Rakoff ended the day after only about 20 minutes of Cohn’s testimony.