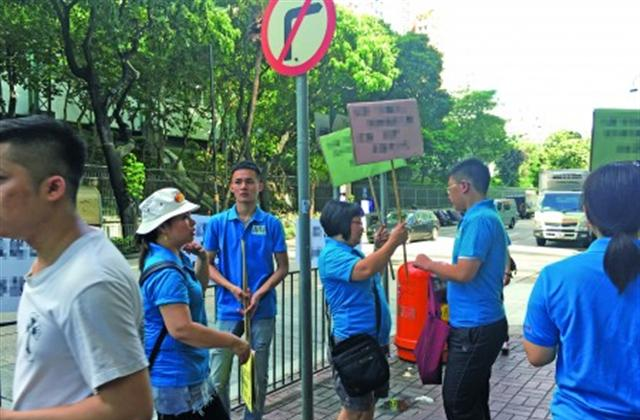 Members of the “Knowledge Is Power” group holding placards before the Macpherson Stadium to oppise the dance competition. (Epoch Times)
China

Efforts to interfere with an upcoming Chinese dance competition continue in the semi-autonomous territory of Hong Kong, with the mainland regime pulling strings to undermine the independent Chinese-language broadcaster hosting the event.

In the afternoon of July 20, members of various organizations known to be front groups for the communist authorities gathered near the Macpherson Stadium, where the New Tang Dynasty International Chinese Classical Dance Competition is to be held on Aug 1. They placed placards and posters on nearby buildings and streets within sight of the Stadium to attack the event.

Cheryl Ng, NTD representative of the dance competition in Hong Kong, condemned the interference outside the stadium and called it a setback for Hong Kong-mainland relations.

It’s not the first time the competition has been pressured. In April, New Tang Dynasty Television (NTD) obtained a contract to hold the event at Hong Kong’s Heung Yee Kuk Tower Theater, only for the local government to abruptly requisition the venue for its own use.

According to Ng, NTD filed a formal complaint with the Food and Environmental Hygiene Department to demand the removal of the posters. By nighttime, Hong Kong authorities had cleared most the placards and banners from the establishments, including a restaurant, that the demonstrators had posted them on.

The Youth Care Association is infamous for its aggressive scuffles with practitioners of Falun Gong as the latter raise awareness about the persecution of their faith faces in mainland China. The most recent incident was on July 17, when members of the group came out to demonstrate against a Falun Gong parade condemning 17 years of persecution by the Communist Party.

“We believe this is the work of Leung Chun-ying’s government and associations that support the Chinese Communist Party,” Ng said, referring to the city’s Chief Executive. “Everyone knows that the Hong Kong Youth Care Association is a front for the 610 Office.”

The 610 Office is the shorthand name for an extralegal Communist Party organization tasked with implementing the persecution of Falun Gong. Indeed, the HKYCA’s offices are in the same building as a 610 Office subordinate agency in Shenzhen, and are staffed by the same individuals, according to a 2012 investigation by Apple Daily.

NTD, based in New York, is an independent Chinese-language television broadcaster that frequently reports on human rights in China, with often exclusive coverage of the persecution of Falun Gong. NTD and Epoch Times are part of the corporate parent company, Epoch Media Group.

Leung Yiu-chung (no relation to Leung Chun-ying), a pro-labor member of the pan-democracy camp in Hong Kong, and a long-time member of the Legislative Council, called for a police investigation into the associations’ ties to the communist regime, and placed blame at the feet of Leung Chun-ying.

“Over the past few years, Leung Chun-ying has been very biased,” Leung said. “He has been aiding these red organizations financially and politically.”