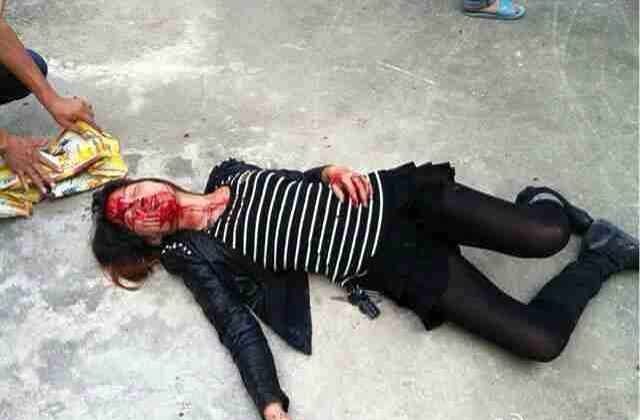 Villagers at the site of a forced demolition of a house are suddenly surrounded by hundreds of police and thugs who “beat up everyone in sight,” on Oct. 19 in Fuzhou City, China.
China

A forced demolition in China turned into a scene out of a violent video game on Oct. 19. A mob 200 hundred strong, made up of the urban administrative law police known as Chengguan, who specialize in brutal control methods, riot police, regular police, and 70-80 out-of-town hired thugs descended on Wudu, a village in the town of Nanyu, within the city limits of Fuzhou, the capital of southern China’s Fujian Province.

They surrounded a villager’s house as its forced demolition began. Villagers at the site were attacked by the Chengguan and their hired goons; at least 10 people were severely beaten.

A villager who witnessed the entire scene and who wishes to remain anonymous, told the Epoch Times: “Twenty people from my village were beaten, with five of them sustaining severe injuries. One of them lost an eye after being beaten savagely.

“Another villager, who had already been beaten to the ground, had his hands stepped on firmly by the demolition people while others raised his legs. Another person then struck his kneecaps with an iron bar, breaking his legs. His doctor says he will be handicapped for the rest of his life. This man was only in his 30s, and was the sole support of his family. He wasn’t even the owner of the demolished house—he was just a neighbor.”

At some point the Deputy Mayor of Nanyu is said to have ordered that the villagers be beaten to death, and then have their bodies removed immediately. Those villagers, who were already lying on the ground after having been severely beaten, were then beaten again.

Ambulances arrived at the scene, but the Deputy Mayor would not allow them to help the injured. Other villagers eventually transported the injured to hospitals themselves after waiting for the demolition forces to leave.

“The Chengguan were insane; they beat up everyone in sight,” a local villager said. “The villagers didn’t even have a chance to speak up. The police from Nanyu were standing nearby; yet even they didn’t dare to intervene. They knew that if they had stepped in, they would be in trouble themselves.

“The injured villagers have no one to even file their grievances with because the officials always stick together. The mayor is like a local emperor here; nobody dares to displease him,” the villager said.

Translation by Frank Fang. Written in English by Barbara Gay.