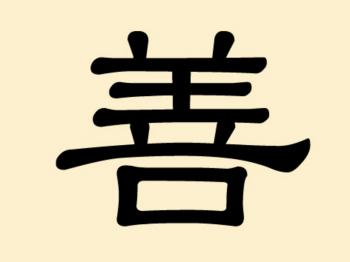 The Chinese character for compassion,
China

Sharon Shay
View profile
Follow
biggersmaller
Print
The continuing encroachment of technology and modernity on China’s ancient heritage was exemplified in a village in Shandong Province recently: a unique surname faces extinction because it cannot be entered into computers.

“The last name from our ancestors is very rare,” said Xian Changyou of Gaozhuang Village, Gaozhuang Town, Shandong Province, where the surname originated and where it may perish.

The surname (pictured) is pronounced Shan, with a falling then rising tone, and dates back to the Tang dynasty.

“Two hundred people in our village had to change their last names,” Mr. Xian said to the Qilu Evening News. Of the 3,500 or so villages in Gaozhuang, approximately 200 of them had people with the last name Shan.

One after another, possessors of the surname have had to adopt a different Chinese character with a similar pronunciation, just to navigate daily issues of driver’s licenses and identity registrations.

Villager Shan Haijian, for example, holds a driver's license that lists him only as “Haijian,” because computers cannot input his family name. He says he is frequently questioned by police, who suspect him of possessing a fake license.

Villagers with the Shan surname also face difficulties when they register their children at schools, apply for insurance, open bank accounts, or transfer money. “Do you think computers make your life easier or more difficult?” a villager jested to a Qilu Evening News journalist. In the past, he noted, he could manually write his Shan surname, but now he has to pick a different character from the computer and then have it notarized at the police station.

As early as 2003 newborns in the village were all given different last names so as to avoid complications in the future. In 2006 when the second generation of identification cards were issued the local police suggested everyone change their surnames.

Though many villagers have acquiesced and changed their names, they mourn the loss. “We do not want to lose our ancestral names in our lifetimes,” one villager said. “Our generation still knows the original name, but our children will forget in the future.”

The police have taken a more businesslike approach. “This name is very rare. Our computers cannot display the character,” an officer from the Gaozhuang police station told the Evening News. “It would be difficult for the villagers to merge into society with such a last name.”

Pan Jianrong is the leader of the Heze Culture and Ancient Chinese Civilization Research Association. According to his research, the Shan surname was most likely created by Emperor Tang Gaozong and bestowed upon a general during the Tang Dynasty as a way of honoring the family.

“The Chinese characters contain China’s ancient culture,” Mr. Pan remarked. “You can’t just cancel them because of some technical issue.”