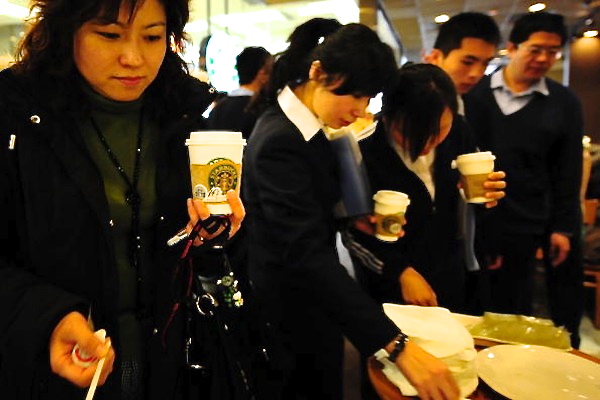 Customers get coffee at a Starbucks store in Beijing on Jan. 14, 2009. Party mouthpiece CCTV criticizes Starbucks for being too expensive in coordinated reports on Oct. 20 and 21. (Frederic J. Brown/AFP/Getty Images)
China

In Attack on Starbucks, Chinese Broadcaster Gets Coffee on Face

They did—the station’s website shows 42 articles and investigations criticizing the coffee chain’s prices in China in 24 hours—but the effect was probably not as intended.

Instead of a compliant public rallying around the Communist Party’s latest assault on the arrogant West, represented by one of its flagship companies, Chinese Internet users began examining CCTV itself, and questioning why it was running what was clearly an overt propaganda campaign.

Reports began flooding CCTV Oct. 20, as the broadcaster dispatched reporters at all corners of the earth to buy a cup of medium latte, including in Beijing, Chicago, London, and Mumbai.

“The price is ridiculously expensive for most people in Beijing,” the narrator explained.

An identical latte in Chicago costs $3.26, around one thousandth the monthly income of the average white collar worker in the city, “not a luxurious thing if they buy a cup of Starbucks coffee everyday,” the report said. In London a medium latte’s £2.5 ($4) was also about one thousandth of the monthly salary — “even cheaper than some traditional coffee brands in England.”

Now the rank unfairness, as told by CCTV: “Both England and the United States have much higher per capita income than China, but the same Starbucks coffee is much cheaper there than it is in China.”

The report shows not only that coffee prices are higher in Beijing, but that even the coffee mugs in Starbucks are more expensive, despite their being labeled “made in China.” A $6.95 mug in Chicago, for example, is priced 100 yuan ($16.41) in Beijing.

CCTV’s investigation was, however, not greeted with much sympathy on the Internet. Netizens instead began mocking the stations “lack of common sense in finance” and said it was “misleading people.”

“Everybody on earth knows that Starbucks doesn’t have a monopoly in its business. Even if it sells a 300 yuan cup of coffee, it wouldn’t be CCTV’s place to criticize them,” said Liu Shengjun, a Chinese economist and financial columnist, on Sina Weibo, a Twitter-like social media platform.

Liu added: “Freedom is the basic principle of a market economy, but CCTV doesn’t seem to even understand this basic principle. I recommend that CCTV take a little more time to criticize the monopolies of state-owned companies in China’s oil, telecom, and financial industries.”

Chen Guo, a consulting director at IBM in China, wrote: “Pricing and profit depends on supply and demand and inventory turnover. My observation is that a lot of Chinese people stay in Starbucks for hours once they get in, which is one possible reason for higher prices.”

Internet users complained that CCTV spends its effort going after foreign companies, but fails to address the basic needs of people in China, including on matters of housing prices, official corruption, and so on.

“Why doesn’t CCTV talk about how high the price levels are in China, how terrible our medical equipment is, how corrupt civil servants are, how education conditions are, how expensive the gas and taxes are? Aren’t you ashamed to say someone’s coffee is too expensive?” blasted netizen Jay Shinidexiaoqianzi. “If you really don’t have anything else to do, please pay more attention to China’s livelihood issues.”

Starbucks is not the first foreign company to fall into the crosshairs of the Communist Party’s media channels. McDonalds, KFC, and the Japanese chain restaurant Kungfu Catering have all been subject to unflattering reports in China.

The latter was accused this past July of having harmful bacteria in its ice. “The ice cubes have more harmful bacteria than toilet water,” said the narrator in the program “Is It True?” which purports to verify rumours on livelihood issues.

The reporters took samples of ice cubes from stores in China and brought to a chemical lab for testing. It was later questioned online, though, whether the reporter’s own equipment had contaminated the ice cubes.

Other Western companies have also come under pressure this year, including the British pharmaceutical giant GlaxoSmithKline, which was accused of buying off doctors.

In the case of Starbucks, some Chinese accepted that the drinks may be a bit expensive — but they said they weren’t too worried. “I feel that I can rest assured after CCTV’s reports, because if they can only use ‘price discrimination’ to crackdown on Starbucks, that means it can’t find any problems with food safety, quality of service, taxes, and even the treatment of employees,” said Zhutiti Xiaopengyou, on Weibo.

He added: “Starbucks is a company with conscience. I’m gonna get a coffee right now.”