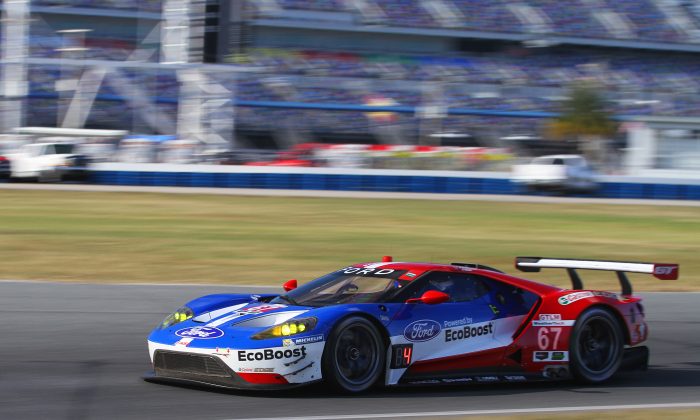 The Ford Chip Ganassi Racing Ford GTs proved to be the fasted of the GT Le Mans field at the IMSA WSC test at Daytona, Dec. 13–14. (Chris Jasurek/Epoch Times)
Motorsports

Corvette Racing brought its pair of C7.Rs, and Ford/Chip Ganassi racing brought two of the four Ford GTs which will represent the team at the Rolex 24. Risi Competizione brought its Ferrari 488, and BMW team RLL brought one of its two M6 GTLMs. Porsche GT Team brought both its new mid-engined 911 RSRs.

Lap times don’t mean much at a test session. Even well-developed cars like the Corvettes and the Ford GTs were running over a second off of race pace.

Risi Competitzione’s best lap was a 1:45.621 by Toni Vilander, in the final session.

BMW’s Bill Auberlen lapped at 1:45.757 in the second session, the best time for that team.

As usual, GTLM was so close that lap times hardly mattered anyway. The slowest of the GTLMs, the #912 Porsche, turned a lap at 1:46.233, just eight-tenths of second off the leader’s pace, in a brand new car which had never run at Daytona.

Quickest, but Not Fastest

One interesting note: top speeds for all the GT Le Mans cars were slower than almost all the GT Daytona entries.

Emanuele Busnelli in the #46 Ebimotors Lamborghini Huracan GT3 was the fastest of the GTDs at 179.3; Gunnar Jeannette in the #50 Riley Motorsports/WeatherTech Racing Mercedes AMG GT3. was twelfth quickest in class at 175.1 mph.

Ryan Briscoe in the #67 Ford GT equaled Jeannette’s best at 175.1, while the rest of the GTLM field trailing behind Bruno Spengler’s speed of 174.7 mph in the #25 BMW. The slowest GTD speed, Christina Nielsen’s mark of 172.2 mph in the Scuderia Corsa Ferrari 488 GT3 equaled the slowest GTLM time set by Laurens Vanthoor in the #911 Porsche RSR.

GTLMs generate a lot more downforce, which robs top speed but increases cornering speed, while the GTDs are much sleeker and about as powerful.

This could create a lot of action during the race as GTLMs have to fight past GTDs in the infield, then possibly losing the position on the banking.

Preparing for the Roar and the Rolex

Teams will take the data gathered at the two-day test and modify their cars over the next two weeks to prepare for what is arguably the most important test of the season, the three-day Roar Before the Rolex 24, Jan. 6–8, 2017.

Teams will come to the Roar with cars much closer to final racing form, even more so this year because IMSA has installed new telemetry systems to prevent sandbagging (teams deliberately running slowly to hide their true potential from competitors.)

IMSA will make final Balance of Performance adjustments after the Roar, and then the cars will be set for the season opener, the 2017 Rolex 24 at Daytona, Jan. 28–29, 2017.

Tickets for the Roar and the Rolex can be purchased through the Daytona International Speedway website.