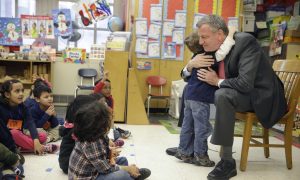 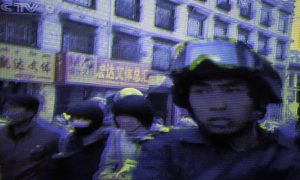 PORTLAND, Ore.—Portland State University (PSU) faculty and students rallied for fair faculty contracts and a reprioritizing of administrative spending, hiring, and salary, among various points of contention, on Feb. 27.

Despite the cold and rain, nearly 1,000 students and faculty gathered in the PSU Park Blocks to show their support for PSU faculty. Several professors sported their graduation attire and students held signs and banged on drums.

Jose Padin, professor in the department of sociology at PSU for 18 years, was inspired at the outpouring of support, and he hopes to see fair wages for PSU’s most exploited faculty as well as student-centered educational practices.

The faculty has been in negotiations for over 10 months, and has recently reached an impasse, making the probability of a strike a reality. A signature-less email went out to students Monday, expressing the administration’s disappointment in the declaration of an impasse.

“The outcome that we want to see is an agreement that binds the administration to investment in our faculty, bringing our resources back into the classroom,” said Padin.

“They’re purposing very low salary increases that don’t keep pace with inflation that effectively amount to a pay cut,” said Steve Walton, professor of French in the world languages and literature department at PSU, in an interview.

According to statistics from the American Association of University Professors (AAUP), the majority of PSU administrators’ salaries have increased dramatically over the past 10 years, including by 90 percent for the university president, while senior professors received just a 1 percent increase over the same 10-year period.

“For 10 months, we’ve been sitting at the table with an administration that wants us to sign on the line—on an agreement to give them a blank check to continue shifting resources away from the classroom and into administrative bloat, runaway administrator salaries, and a lot of other non-education related expenditures,” said Padin.

Scott Gallagher, Portland State’s director of communications, expressed disappointment with the impasse, but he respects students’ right to rally. “In fact, we feel it’s part of the college/university experience to voice your opinion and ask questions,” he said.

Patricia Schechter, professor of history at PSU for 18 years, is hoping to send a message to the administration regarding the impasse. “We know that there’s a decreasing percentage of the budget that’s directed to instruction and an increasing number of administrators with increasing compensation,” she said. “That is the wrong direction for the university to be going in, and we’re here to take a stand.”

Students have been working with faculty and the AAUP in an effort to plan the rally and keep the student body informed as to the recent stalemate in negotiations, during which just three students are allowed to be present.

“I see what the administration is doing,” said Inna Levin, one of the student observers during negations and one of the rally organizers. “I’ve seen our classroom sizes getting bigger. I’ve seen my professors struggling to manage classes that are way too big for them to handle. They don’t have nearly as much time as they use to, to work with students one-on-one, which is really disappointing to me.”

Portland State professors are currently asking for a salary increase of less than 3 percent, a minimum adjustment for inflation. Gallagher remains confident that faculty and administration will reach an agreement.

Faculty demands have been echoing across the country—by both university professors and K–12 teachers—as a last resort to receive fair pay, insurance, reprioritization of administrative spending back into classrooms, class sizes, retirement, professional development and support, and employment stability. The University of Illinois, Chicago’s faculty and its supporters picketed the campus for two days in a February strike.