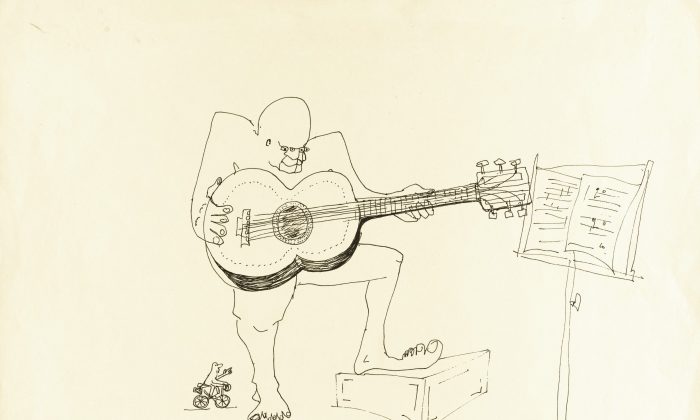 The manuscript, “The Singularge Experience of Miss Anne Duffield,” was the top lot in the sale and had been estimated to bring $50,000 to $70,000.

The material was created for the two critically acclaimed books Lennon published during the height of Beatlemania. Sotheby’s said 100 percent of the 89 lots sold, with 83 percent selling above the pre-sale high estimate.

“In his Own Write” was a collection of 31 short stories and poems full of puns and spelling errors that was published in 1964. It was a big hit with reviewers who compared Lennon to Lewis Carroll and Edward Lear. It was followed a year later by “A Spaniard in the Works,” its title a pun on the British term “a spanner in the works,” similar to the American expression “a monkey wrench in the works.”

The collection belonged to Lennon’s British publisher, Tom Maschler, who held on to it for a half-century. Sotheby’s described it as the largest private collection of Lennon’s work to come to the market. Before becoming famous as a musician, Lennon, who was fatally shot in 1980, trained as an artist at the Liverpool School of Art.

A cartoon of a boy with six birds that appeared in “A Spaniard in the Works” sold for $27,500 on Wednesday. The drawing was used 30 years later as the cover for the Beatles single “Free as a Bird.”

Lennon wrote the song in 1977. Twenty-five years after the group’s breakup and 15 years after Lennon’s death, it was released with additional instrumentation and vocals from the other three band members in 1995. The cartoon had a pre-sale estimate of $12,000 to $15,000.

Maschler called Lennon a man of “extraordinary talent and imagination.” He said in a statement that Lennon’s art has been underrated and he hoped that the auction would “redress the balance.”

Maschler, who worked with Lennon on the two books while literary director at Jonathan Cape publishers, has worked with other famous authors, including Tom Wolfe, Edward Albee, Philip Roth, and Salman Rushdie.