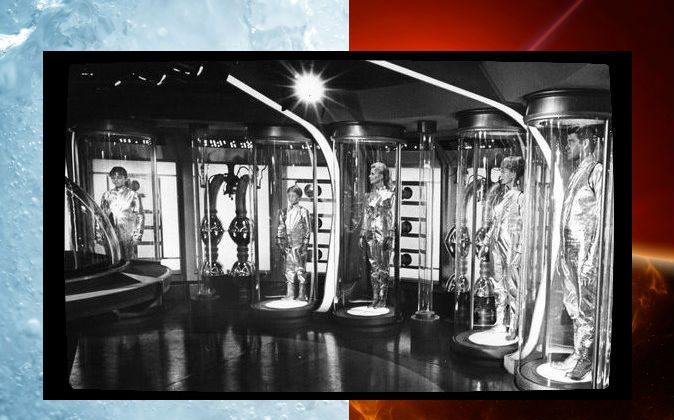 A frame from the 1965 program premiere of “Lost in Space” shows the Robinson family in suspended animation. (CBS Television/Wikimedia Commons) Background: Ice (Shutterstock*); an illustration of a planet (Enrico Giuseppe Agostoni/iStock/Thinkstock)
Good to Know

If People in Suspended Animation Are ‘Dead,’ Sticky Legal Issues Could Arise

Most suspended animation patients are declared legally dead by physicians before they are put in this state. For example, at the UPMC Presbyterian Hospital in Pittsburgh, Penn., patients who have sustained fatal gunshot wounds will be put in a state of suspended animation—or suspended living as the researchers prefer to call it—to buy time so they can be treated for hours.

Lawyer Kamil Muzyka asked: “Why treat a person, who can be … put into suspended animation for the time of being transported to the proper medical facility, and supposedly stabilized, operated, and have his vital functions restored, as a dead person?”

Muzyka is a lawyer specializing in industrial property law and technology management with an interest in legal issues related to artificial intelligence and mind-upload. He also researches asteroid mining and international space law. He explored these legal questions related to suspended animation in an article for the Institute for Ethics and Emerging Technologies (IEET), a non-profit based in Connecticut.

He said that, while it may be justifiable to declare suspended living patients legally dead given current technological possibilities, this may cause problems in the future.

One of Muzyka’s ideas on how to handle this matter is to appoint a legal representative for the patient since he or she cannot conduct legal acts of will. Muzyka said this is simpler than declaring the person “dead by absentia” and then reversing the process after revival. Property rights and other rights can be difficult to regain using the latter method.

One method of suspended animation involves pumping cold saline into the brain and heart; the saline flows through the whole body, replacing the blood. The body is then drastically cooled.

Surgeon Peter Rhee at the University of Arizona in Tucson, who helped develop this technique, told New Scientist in March: “After we did those experiments, the definition of ‘dead’ changed. … Every day at work I declare people dead. They have no signs of life, no heartbeat, no brain activity. I sign a piece of paper knowing in my heart that they are not actually dead. I could, right then and there, suspend them. But I have to put them in a body bag. It’s frustrating to know there’s a solution.”

A technique used by The Cryonics Institute, based in Florida but with facilities around the nation, includes ice-bath cooling and the use of a heart-lung device, according to its website. The price listed on its website for patients is a one-time fee of $88,000 for a lifetime.

Senior aerospace engineer at NASA Mark Schaffer spoke at the International Astronomical Congress (IAC) in Toronto earlier this month of using suspended animation on astronauts. According to the Liberty Voice Guardian, Schaffer said the goal is to put space travelers in stasis for 90 days of the 180 needed to reach Mars and research is being done toward this end.