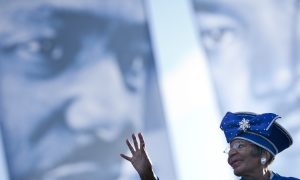 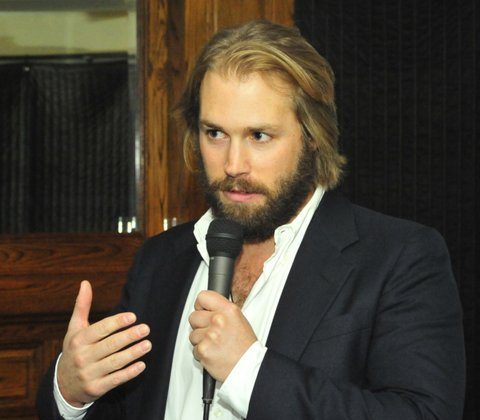 “Now is the time to unite together to become leaders and symbols of justice and freedom worldwide.”—James Houston White, founder of ICONS UNITE. (Robin Kemker/Epoch Times)
US

Playing Music to Uplift the World: Icons Unite for Freedom

On Aug. 8 ICONS UNITE, a community of musicians who have joined forces to promote human rights, kicked off its first California concert, at the Victorian in Santa Monica. The group seeks, through their music, to promote freedom of speech, freedom of belief, and the abolishment of human trafficking.

Back in May of this year, ICONS UNITE, in association with the award-winning film, “Free China: The Courage to Believe,” hosted the Be the Voice of Freedom! Concert at Susan Sarandon’s SPiN in NYC.

“Now is the time to unite together to become leaders and symbols of justice and freedom worldwide,” said James Houston White, founder of ICONS UNITE.

The Santa Monica event featured six performances by groups and individuals, singing and playing songs about freedom. ICONS UNITE has a presence on social media and is looking to reach more and more musicians who want to touch the world and perhaps make it a better place.

Epoch Times had a chance to interview White in-depth at the event.

ET: What was it that first inspired you to create this groundbreaking event?

James Houston White: When first starting ICONS UNITE, I saw that very important human rights abuses were not yet part of mainstream knowledge. It became clear that building awareness was the first step in addressing these issues, and since music has the power to inspire and move the masses, I thought it was a perfect marriage.

But, I didn’t start ICONS UNITE on just a hunch, I reached out to the artists I knew. I found very different people from very different backgrounds with very different music to have very similar aspirations and motivations. The artists I know aren’t, in fact, infatuated with fame—they want to inspire people, they want to connect, and they want people to relate to their music. They want to make a difference in the world, not tomorrow, but today. The more successful their music becomes, the more their voice and message can be heard. And that’s what I want ICONS UNITE to become—a megaphone to amplify their voice; a loud speaker of inspiration, to unite together to fight oppression worldwide.

The artists involved with ICONS UNITE are very special people, and it’s time the world hears their voices. And that’s how ICONS UNITE became a community of musicians that want to raise awareness for freedom of belief, freedom of speech, and the abolishment of human trafficking.

Our goal is to build a grassroots community via local artists performing at monthly concerts, starting in LA, and then branching out to Austin, Nashville, New York, and throughout the U.S.

At the same time, we hope to build a virtual community via streaming our concerts online and by promoting these amazing musicians through our YouTube channel (www.YouTube.com/ICONSUNITE), where we currently have twelve talented artists who each have at least one song about Freedom. We hope every concert will attract more artists to perform and to get involved with our YouTube channel, so that we can continue to cultivate an international community online via YouTube, Facebook (www.Facebook.com/ICONSUNITE) and Twitter (www.Twitter.com/ICONSUNITE).

ET: Why did you choose to use music to promote freedom of speech, freedom of belief, and the abolishment of Human Trafficking? Do these areas touch you personally?

JHW: I think the first step in tackling these issues is to raise awareness for them, and music is the perfect medium to do that. The artists I know want to be heard, they want to inspire the world and they want to make a difference, not ten years down the road, but right now. That’s what I hope ICONS UNITE will become—a megaphone for these artists that want to fight oppression worldwide.

Several years ago, I was shocked to learn about forced organ harvesting in China by the book “Bloody Harvest,” an investigative report written by David Kilgour and David Matas. That sparked a deeper curiosity to learn more about human trafficking as a whole. In that process, I became more aware of the importance of foundational personal liberties that are protected by our First Amendment. For example, without freedom of speech, how can change really happen? If we aren’t protected and allowed to speak our minds in a safe, open, constructive way, then social change cannot happen.

ET: You use the term ‘heart centered,’ how does this differ with musicians who may have different ideas regarding their music?

JHW: Each and every artist that is involved with ICONS UNITE has a big heart—they seem to realize that their musical gift is not simply for themselves—it can be used to uplift the planet. For the ICONS UNITE community, there is a deeper sense of moral obligation, compassion, and justice that needs to exist in the world. While other musicians may not yet have written music about freedom, I do believe there is a hunger among young musicians to want to change the world, so I hope these are the artists who reach out to us to get involved with our concerts, our YouTube channel, and on our other social platforms. We are seeking talented musicians from bands signed to a record label to a teenager who cares deeply about these causes. Everyone is welcome, from any genre of music.

It’s been an honor to work closely with Ingenious Records, the independent record label in Miami, who, in my mind, is a true role model for the music industry as they create music with a profound message. Belle, their artist involved with ICONS UNITE, recently released a groundbreaking pop track called “Lambs to Slaughter,” discussing forced organ harvesting and the horrendous “Bodies” exhibition, both of which target and murder innocent people of faith in China.

ET: Was it difficult to find musicians who are dedicated to these various causes?

JHW: It was pretty easy to find artists who care about these issues. The musicians I know are very heart-centered, caring people, and they want to improve the world around them. Although a lot of musicians care about these social causes, some have not yet written songs about them. Our goal is for ICONS UNITE to become the way for them to project their message and music into the world, and, in time, we hope more artists will be interested in writing freedom-themed music to raise awareness for these urgent issues.

ET: What type of feedback are you getting from your audience?

JHW: The feedback has been very positive. At our NYC launch concert on May 19th at Susan Sarandon’s SPiN, everyone genuinely had the best time—they were so happy to be a part of a family of conscious, compassionate artists inspiring the world to stand up against injustice with their music.

ET: How do you envision this platform making a difference in the world?

JHW: Our hope is to raise awareness and support for freedom of belief, freedom of speech, and the abolishment of human trafficking, which will entail working with organizations aligned with that mission. For example, Epoch Times and NTD Television, two global media networks that are leading the charge in protecting freedom of speech and press, have been very supportive of ICONS UNITE. We hope to cultivate more symbiotic relationships such as these, uniting together for freedom worldwide.

ET: How did you come to use the name ICONS UNITE?

JHW: An icon is both a leader and a symbol. The aim of ICONS UNITE is to cultivate a community of leaders who want to unite together as symbols for justice and freedom worldwide.