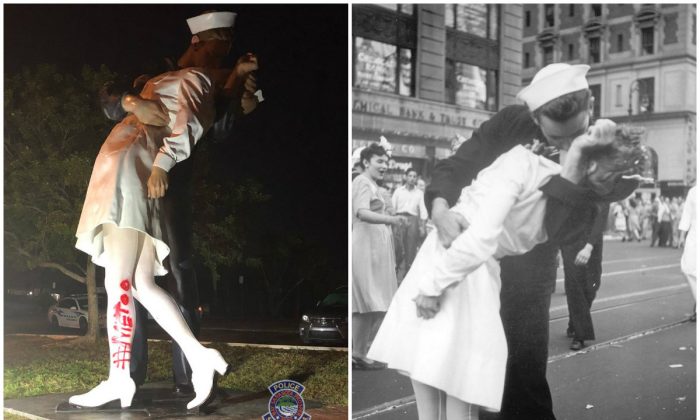 A statue based on an iconic photo was vandalized with the text "#MeToo" on Feb. 19, 2019. (Sarasota Police and Victor Jorgensen/U.S. Navy, File)
US

A famous statue in Florida depicting the iconic photograph of a sailor kissing a woman in a nurse’s uniform in Time Square at the end of World War II was found vandalized in the early on Feb. 19, a day after the veteran in the photo died.

Sarasota Police Department said in a news release that they were called to the Unconditional Surrender statue, where an unknown individual had spray painted the text “#MeToo” on the statue.

Authorities said the text was spray painted in red along the left leg of the nurse and covered the length of the nurse’s leg. Officers conducted a search of the area to locate the spray paint can but found nothing. Apart from the statue, no other objects in the vicinity were found to be defaced or spray painted, police said.

Officers added there was no surveillance camera that captured the incident and no known witnesses. They believe the incident occurred on Feb. 18 but were unable to give an exact time.

“The approximate damage is estimated to be more than $1,000 due to the large area that the graffiti covers and the resources needed to repair it,” the statement said, adding that the city of Sarasota Public Works had been notified.

On Feb. 19 at around 7 a.m., the city of Sarasota posted a tweet announcing that the graffiti had been removed from the statue.

Graffiti has been removed from the Unconditional Surrender statue. pic.twitter.com/dSrq1MbfsJ

The statue is based on the iconic photo taken by Alfred Eisenstaedt and was first published in Life magazine and is called “V-J Day in Times Square,” but is known to most as “The Kiss.”

The photo shows World War II sailor, George Mendonsa, kissing Greta Zimmer Friedman, a dental assistant in a nurse’s uniform, on Aug. 14, 1945—known as V-J Day, the day Japan surrendered to the United States. People spilled into New York City streets to celebrate the news. That was when Mendonsa planted a kiss on Friedman, whom he had never met.

Throughout the years, several people claimed to be the kissing couple, but Mendonsa and Friedman were eventually confirmed to be the couple.

The vandalism in Florida occurred one day after Mendonsa died in Rhode Island, where he lived with his wife for 70 years. Mendonsa’s daughter Sharon Molleur told The Providence Journal that her father, 95, was living in an assisted living facility when he fell, had a seizure and died on Feb. 17.

Mendonsa served on a destroyer during the war and was on leave when the end of the war was announced.

When he was honored at the Rhode Island State House in 2015, Mendonsa spoke about the kiss. He said Friedman reminded him of nurses on a hospital ship that he saw care for wounded sailors.

“I saw what those nurses did that day and now back in Times Square the war ends, a few drinks, so I grabbed the nurse,” Mendonsa said, WPRI-TV reported.

Friedman said in a 2005 interview with the Veterans History Project that it wasn’t her choice to be kissed.

“The guy just came over and kissed or grabbed,” she told the Library of Congress, adding, “It was just somebody really celebrating. But it wasn’t a romantic event.”

Friedman fled Austria during the war as a 15-year-old girl. She died in 2016 at the age of 92 at a hospital in Richmond, Virginia, from complications of old age.

Anyone with information on this case is asked to call the Sarasota Police Department Patrol Division at 941-954-7025 or leave an anonymous tip with Crime Stoppers by calling 941-366-TIPS or online at www.sarasotacrimestoppers.com