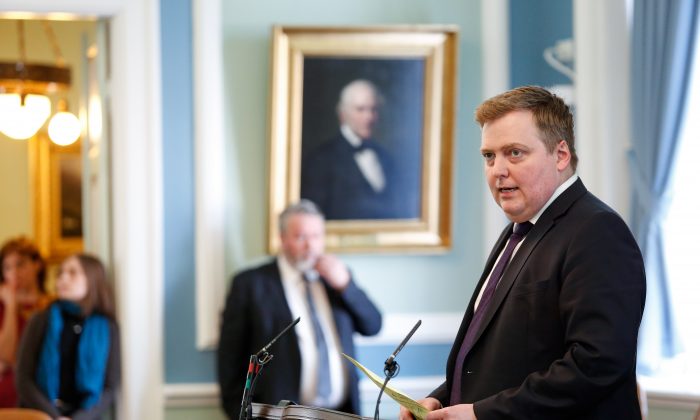 Iceland's Prime Minister Sigmundur David Gunnlaugsson, speaks during a parliamentary session in Reykjavik on Monday April 4, 2016. Iceland's prime minister insisted Monday he would not resign after documents leaked in a media investigation allegedly link him to an offshore company that would represent a serious conflict of interest, according to information leaked from a Panamanian law firm at the center of an international tax evasion scheme. (AP Photo/Brynjar Gunnarsson)
Europe

The prime minister of Iceland resigned on April 5 after the Mossack Fonseca data leak revealed he had a secret offshore company in Panama.

Prime Minister Sigmunder David Gunlaugsson stepped down after calls for him to leave office, according to Icelandic media. His resignation is the first major political impact after the Panama Papers were released.

Iceland’s government has been in turmoil after data from Panama law firm Mossack Fonseca was leaked on April 3, which revealed that the prime minister and his wife set up an offshore company and failed to disclose it when he entered parliament in 2009.

Prime Minister Sigmunder David Gunlaugsson had recently called for a dissolution of parliament and a new election after leaked documents revealed by the the International Consortium of Investigative Journalists showed that he, along with his wife, owned a British Virgin Islands shell company called Wintris Inc. The data breach revealed share certificates that show the couple as the owners of the offshore company Wintris.

Since the Mossack Fonseca document leak, there have been calls for Gunlaugsson’s resignation. Lawmakers claim that the ownership of the offshore company is a massive conflict of interest with his public position.

On April 4, thousands of protesters gathered outside parliament, demanding the prime minister to step down.

According to Reuters, Iceland President Olafur Ragnar Grimsson said on April 5 that the prime minister called for the dissolution of the party after the opposition called a vote for no confidence in the government.

“I went over that with the head of the Independence Party that if the MPs of the party did not feel up to supporting the government … I would dissolve the parliament and call for new elections as soon as possible,” said Gunnlaugsson on Facebook.

However, President Grimsson refused his request. The president said he wanted to discuss the situation with other party leaders before deciding to end the coalition government between the prime minister’s center right Progressive Party and the Independence Party.

“I need to determine if there is support for dissolving (parliament) within the ruling coalition and others. The prime minister could not confirm this for me, and therefore I am not prepared at this time to dissolve parliament,” President Grimsson said.

Prior to his resignation the prime minister had vowed that he would not step down after accusations related to his offshore company.

“I certainly won’t (resign) because what we’ve seen is the fact that, well, my wife has always paid her taxes. We’ve also seen that she has avoided any conflict of interest by investing in Icelandic companies at the same time that I’m in politics,” he told Reuters TV.

“And finally, we’ve seen that I’ve been willing to put the interests of the people of Iceland first even when it’s at a disadvantage to my own family,” he added.

In regards to setting up the company offshore in Panama, the Icelandic prime minister has denied any wrongdoing.

The prime minister was asked about the offshore holdings that the data implicated on him and his wife during an interview with a Swedish broadcaster. He walked out of the interview saying, “What are you trying to make up here? This is totally inappropriate,” according to The Guardian.