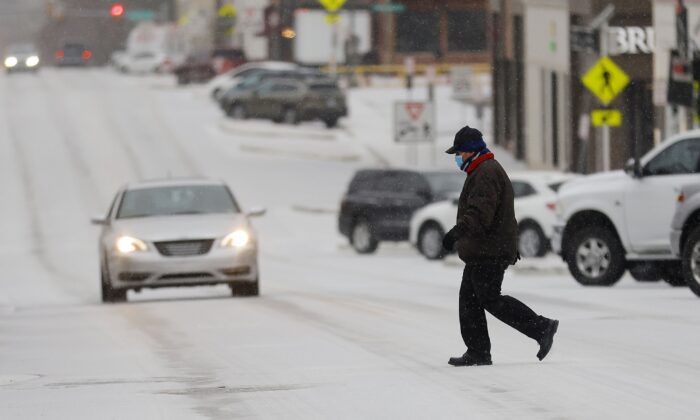 Francisco Savala crosses 15th Street (Cherry Street) between Peoria Ave. and Utica Ave. in the sleet while working at Andolini's Pizzeria, in Tulsa, Okla., on Feb. 23, 2022. (Mike Simons/Tulsa World via AP)
US News

DALLAS—Hundreds of flights were canceled Wednesday at Dallas-Fort Worth International Airport as parts of Oklahoma, Missouri, and Arkansas braced for an ice storm making its way into the Southern Plains.

More than half an inch of ice could accumulate in parts of the Ozarks through Friday morning, the National Weather Service said.

Airlines had canceled more than 1,000 flights by Wednesday morning. More than half of them were at the Dallas-Fort Worth airport, where temperatures dipped below freezing and crews began treating runways overnight, according to airport spokesman Brian Brooks.

DFW Airport is the biggest in the American Airlines network, and American had canceled 8 percent of its flights by midmorning, according to tracking service FlightAware.

Meanwhile, heavy snow was expected in upstate New York and New England later this week, with more than 8 inches possible through Saturday morning.

Winter took a fleeting break in the Northeast on Wednesday, with temperatures soaring into the 60s before they were expected to plunge within hours.

The warm spell sent people streaming outdoors, but it was bad news for ski areas and other winter sports.

“It’s not exactly what you want to see in the middle of the busiest week of the year,” said Ethan Austin, spokesperson for the Sugarloaf ski area in Maine, which was busy because of school vacation week. But he was happy to hear snow was on the way.

The weather whiplash marked the second time in less than a week that there was to be temperature swing of more than 40 degrees in 24 hours.