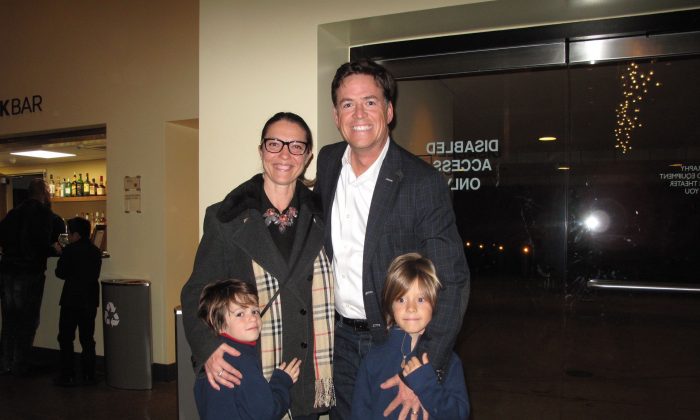 Enthusiasm has been high for the classical Chinese music and dance company as it tours California, with audience members spontaneously standing in ovation at the end of various pieces throughout the two-hour performance.

Two enthusiastic audience members at Wednesday’s performance were Beatrice Laver, a former professional ballerina, and her husband, Lyle, the Los Angeles advertising director for Performances Magazine. They brought along their two sons.

“I wanted from the bottom of my heart to be here,” said Mrs. Laver. She added that she wanted to see Shen Yun specifically to see the spirituality of traditional Chinese culture.

She described the performance as mesmerizing.

“It’s fantastic. It’s very colorful. The tradition is amazing. I’ve been fascinated by Asian culture since I’ve known myself, and I want to introduce our younger kids to another culture,” she said. “So, I love it. I love it.”

She felt underlying themes of hope and happiness throughout the performance.

“It’s very peaceful,” said Mr. Laver. “There’s a level of appreciation of nature, and a gracefulness that exists with the dance, which is hopeful, and integrated in some ways.”

He added, “To see it on stage gives me an appreciation.”

Shen Yun is a New York-based, non-profit organization with a mission to revive traditional Chinese culture, which has been nearly lost after decades of rule by the Chinese Communist Party. Each performance contains approximately 20 vignettes that unfold China’s 5,000-year history, in brilliant colors and high-caliber dance, portraying myths and legends from China’s rich culture, as well as principles with deep roots in the ancient Chinese culture such as benevolence, sincerity, propriety, and wisdom.

Shen Yun’s dancers are among the foremost classically trained dancers in the world, according to its website.

Mr. Laver was impressed by both their skills and costumes.

“The dancers are brilliant, and we’ve seen many different performances in LA, from many of the top ballet companies around the world, but … you don’t see the synchronicity. Everybody is in sync with Shen Yun,” he said.

“I love the costumes,” he added. “I was saying to my wife, a couple of the costumes are really fashion-forward. People should take hints from it.”

Mrs. Laver said she could almost immediately gauge the skill of the dancers.

“They’re very well trained, and of course they have to stay in the shape of a traditional Chinese dancer,” she said. “I can always see that. It’s obvious from the first two seconds.”

Although Shen Yun has received critical acclaim worldwide and has become a global phenomenon by reaching millions, the performing arts company cannot go to China.

Being from Romania, a formerly communist country, Mrs. Laver said she understands the pressure Shen Yun faces, and she applauds the performers. “I think they are doing an awesome job,” she said.

Sharan Magnuson, who worked as a public relations executive at Warner Brothers and Fox, enjoyed the spirituality of the performance.

“I’m a spiritual person, and I think the whole thing is very spiritual,” she said. “The entire Chinese culture, going all the way back from the beginning, is a very spiritual culture, and that comes across in this performance.”

She said she felt relaxed and happy after the first half of the performance, “I felt much better than when I walked in.”

A major feature of Shen Yun is its all-original compositions created for each piece as well as its live orchestra, which combines traditional Chinese and classical Western instruments.

“I adore the live orchestra,” Ms. Magnuson said. “That’s one of the reasons I was really drawn to this. I go to a lot of performances, and to me, the live music absolutely makes it. My husband’s a musician; he plays the guitar in Vegas, and so my life is very musical.”

She added that it was “brilliant, imaginative, and like nothing I’ve ever seen before. Graceful, and just an absolute, pure beauty.”

New York-based Shen Yun Performing Arts has four touring companies that perform around the world, and its World Company will perform throughout the Greater Los Angeles Area through February 8. For more information, visit ShenYunPerformingArts.org.