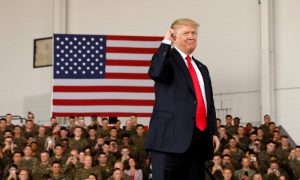 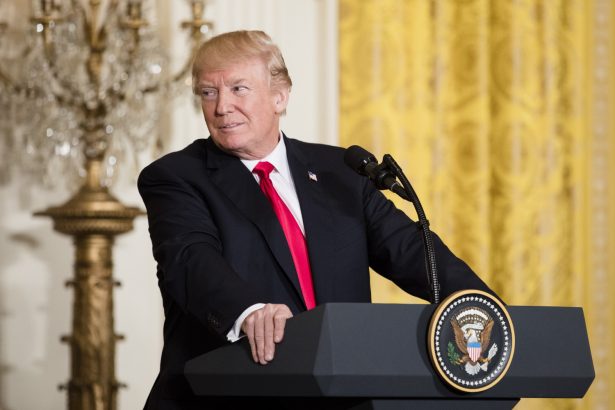 ‘I Promise Not to Do This to Greenland:’ Trump Riffs on Greenland Purchase

President Trump followed up the recent revelations that he had mulled the United States purchasing Greenland on Aug. 20 with a playful post on Twitter.

A gold skyscraper emblazoned “Trump” towers over a coastal hamlet in Greenland in a picture shared by the president.

“I promise not to do this to Greenland,” is all Trump wrote in the caption, leaving his 63 million social media followers to figure out just how far his tongue was in his cheek.

I promise not to do this to Greenland! pic.twitter.com/03DdyVU6HA

The building in the picture bears a close resemblance to the golden Trump International Tower hotel building in Las Vegas.

Officials later confirmed that the story was, in essence, true, although the Wall Street Journal article appears to have fired the starting pistol on any diplomatic process.

Greenland is an autonomous region with a population of around 56,000 owned by Denmark between the North Atlantic and Arctic oceans. Stretching up into the Arctic Circle, Greenland’s landmass is around four times smaller than that of the United States—although typical flat map projections suggest it is much bigger.

The region is dependent on Danish economic support.

On Aug. 19, Trump himself confirmed that he had floated the idea of buying the resource-rich territory with members of his team.

“Essentially it’s a large real estate deal. A lot of things can be done. It’s hurting Denmark very badly because they’re losing almost $700 million a year carrying it,” he told reporters in New Jersey. “So, they carry it at great loss, and strategically for the United States, it would be nice. And, we’re a big ally of Denmark and we help Denmark, and we protect Denmark.”

White House economic adviser Larry Kudlow, who is the director of the National Economic Council, noted that years ago, former President Harry Truman had the same idea.

“Denmark is an ally. Greenland is a strategic place. They’ve got a lot of valuable minerals,” Kudlow said. “I don’t want to predict it now. I’m just saying the president, who knows a thing or two about buying real estate, wants to take a look at a potential Greenland purchase.”

“Greenland is rich in valuable resources such as minerals, the purest water and ice, fish stocks, seafood, renewable energy, and is a new frontier for adventure tourism,” the statement said. “We’re open for business, not for sale.”

Discussions between Trump and his advisers had only been exploratory, with The Wall Street Journal kick-starting a diplomatic process that might have otherwise been initiated further down the line, if ever.

Two of the sources said Trump had asked his White House counsel to look into the idea. Trump reportedly asked advisers if such a purchase could happen and “listened with interest” when they discussed the island’s abundant resources and geopolitical importance, according to the newspaper.

Trump is due to visit Copenhagen, the capital of Denmark, in September, and the Arctic will be on the agenda during meetings with the prime ministers of Denmark and Greenland.

This report has been updated to correct the spelling of Greenland as written in President Trump’s Tweets. The original version incorrectly stated it was spelled Greenlandland in reference to ‘Trumpland.’