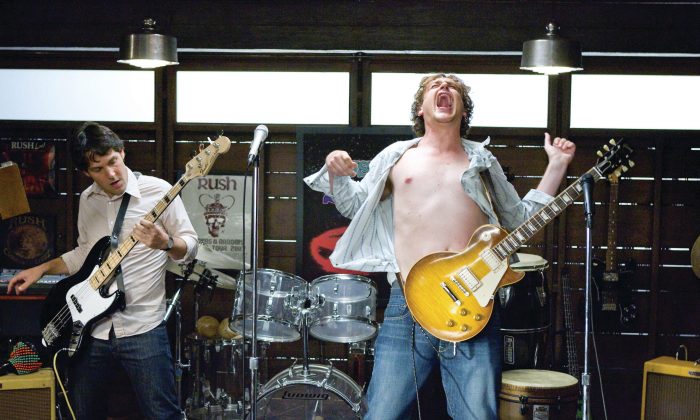 Movie Review: ‘I Love You, Man’

Judd Apatow’s the acknowledged grand poobah of the movement (The 40-Year-Old Virgin, Knocked Up), but Seth Rogen (Superbad, Pineapple Express) and Jason Segel (Forgetting Sarah Marshall) have also done their bit to put the raunch-com at the top of the comedy tree.

You can now add another name to this uber-geek clique, one Paul “never-not-funny” Rudd after a one-two leading man comedic knockout punch this year with January’s hilarious Role Models and this week’s thigh-slappingly funny I Love You, Man.

Rudd stars as Peter Klaven, a real estate agent and “girl’s guy”, devoid of any real close male friends. This proves a real problem after he proposes to his girlfriend Zooey (the talented Rashida Jones, making a Katherine Heigl-like impact in what could have been a thankless role) and realises he has no one to act as his best man on the impending wedding day.

Secretly embarking on a series of man-dates to rectify the situation, Peter’s mano-a-mano experiences range from awkward to downright bizarre.

Then he meets Sydney Fife (fellow cliquer Segel). Confident, charming and opinionated, Sydney is everything Peter wants to be and they form an instant bond. Of course the more “sweet, sweet hangin’” time they spend together, the more Peter grows away from Zooey. Can he coalesce his two relationships together in time for the big day?

A crude, rude but sweet-centred bromance, I Love You, Man is predictably dry-your-eyes funny but with a feel good streak running throughout.

Written and directed by the talented John Hamburg (Meet the Parents/Fockers, Zoolander and Along Came Polly, so he’s on Ben Stiller’s speed dial then), his script is smart, savvy and insightful, with something to say about the nature of relationships as well as supplying the requisite belly laughs that this genre demands (which is very Apatow by the way). This is sure to be his calling card to other geek clique gigs, in large part because he lets others steal the show by using his funny screenplay as a template to improvise around rather than a dialogue bible.

Of course the most notable script abusers and beneficiaries are the two cut-loose leading lovers, Rudd and Segel. Rudd is sensational as Peter, fluffing his attempted cool quips every time with ever increasingly hilarity. Segel, meanwhile, builds on his burgeoning superstar status (Seth Rogen, watch out) as the mysterious but infectious Sydney, leaving us in no doubt as to why Peter is drawn to his charm and carefree lifestyle. Hopefully this is just the beginning of a beautiful on-screen relationship, because just watching these two sit around talking is more entertaining than most other films in their entirety.

As if this wasn’t enough it doesn’t even take into account the comedy stylings of writer-director-actor extraordinaire Jon Favreau, best thing about My Name is Earl Jaime Pressly, J.K. Simmons (Juno and J. Jonah Jameson in Spider-man 1-3), SNL’s Andy Samberg, Thomas Lennon (Balls of Fury, but don’t hold that against him) and the game-for-anything Joe Lo Truglio (Role Models), each one downright hysterical here. It’s a veritable cavalcade of top comedy performers and a geek chic feast of funny for us all to indulge on once again. More please!