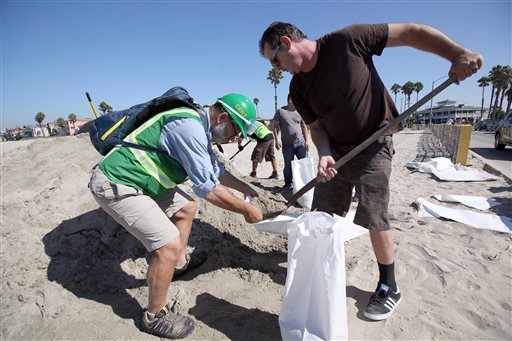 Hurricane Marie has weakened to a Category 2 hurricane but still poses a threat to Baja, Mexico and Southern California.

A large southerly swell was expected to produce large waves, rip currents and strong longshore currents in Los Angeles and Ventura counties through Thursday, according to the National Weather Service.

“These areas will potentially see the largest surf seen in recent years, with breakers of 10 to 15 feet possible,” a Weather Service advisory said.

Swimmers and surfers were urged to be aware of dangerous conditions, and minor coastal flooding and beach erosion is possible, forecasters said.

“Its indirect impacts on Mexico and the United States will be significant. As the hurricane weakens over cooler waters, large waves already produced during the past few days will continue to move outward from its center and toward the coasts of Mexico and California,” AccuWeather said.

“Waves will be highest on south and southwest facing beaches, with the highest waves later Tuesday and Tuesday night into Wednesday.”

“Venturing out onto the jetties can be quite dangerous as well, with waves breaking over some of the jetties potentially washing people into the sea and crashing them into the sharp, jagged rocks,” Clark said.

In the city of Long Beach’s Peninsula neighborhood, residents watched as bulldozers built huge sand berms between the ocean and their homes. Several took the warning to heart and shoveled sand into bags to place around their garage doors and entryways.

Deborah Popek, who’s lived in the area 20 years, took a walk along the boardwalk with her cat, Sophie, to check the surf and see how neighbors were preparing. She’s had flooding in the past, she said, especially in her garage.

“It’s always at the last minute that everybody panics because, you know, we don’t expect things to happen,” she said. “But they’re really taking things seriously because the sandbar is as high as they’ve ever built it right now. I’ve never seen it this high.”

A few yards down the boardwalk, resident Corey Nelson shoveled sand into 10 sandbags with a friend’s help. A firefighter had been to his home Monday with a warning and although the surf was quiet so far Tuesday, he chose to take it seriously.

“He said supposedly the waves come over the breakwater wall and there will be flooding,” he said, adding that the firefighter had talked about 10 to 15 foot waves at a breakwater that protects the Long Beach shoreline.

“We’ve had the water go over the breakwater right here and into our planter, and I mentioned that to him and he said, ‘Well expect that times three.'”

The high surf advisory will be in place for several counties north and south of Los Angeles, including Orange County. But Los Angeles and Ventura counties will likely see the biggest storm surge, according to the NWS advisory.