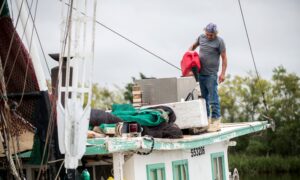 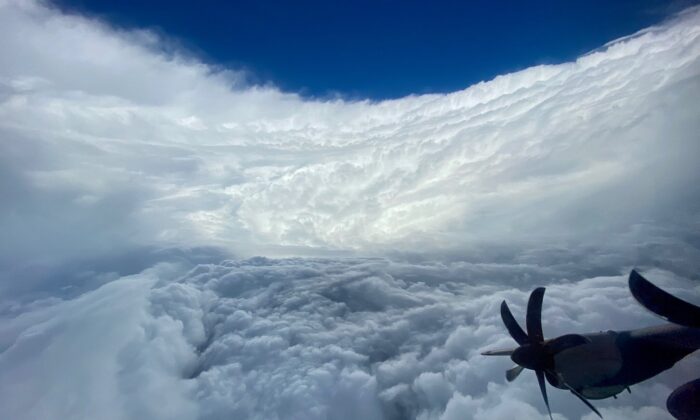 A sky view of Hurricane Epsilon is taken over the Atlantic Ocean on Oct. 21, 2020. (Air Force Reserve via AP)
US News

MIAMI—Hurricane Epsilon’s maximum sustained winds dropped Thursday as it moved northwest over the Atlantic Ocean on a path expected to skirt just east of Bermuda.

Epsilon’s maximum sustained winds ebbed by Thursday afternoon to 85 mph, dropping it from a Category 2 to a Category 1 storm.

But the hurricane swirled near enough to Bermuda that the National Hurricane Center has issued a tropical storm warning for the island. The Miami-based center said Epsilon was centered at 5 p.m. EDT about 200 miles east-southeast of Bermuda. It was moving to the north-northwest at 9 mph.

Forecasters said Epsilon should make its closest approach to Bermuda by Thursday evening and could produce tropical storm conditions around the island during the night hours.

Gradual weakening is expected into the weekend. But large ocean swells could cause life-threatening surf and rip current conditions along the coast of New England and Atlantic Canada during the next couple of days, the hurricane center warned.

Earlier in the week, Epsilon had gained 50 mph in wind speed in just 24 hours to become a major hurricane on Wednesday. That officially qualified it as a rapidly intensifying storm. It was the seventh storm this season to power up so quickly, reaching Category 3 status at one point.

Over the past couple decades, meteorologists have been increasingly worried about storms that blow up from nothing to a whopper, just like Epsilon. Forecasters created an official threshold for this dangerous rapid intensification—a storm gaining 35 mph in wind speed in just 24 hours.

This year’s season has had so many storms that the hurricane center has turned to the Greek alphabet after running out of official names.