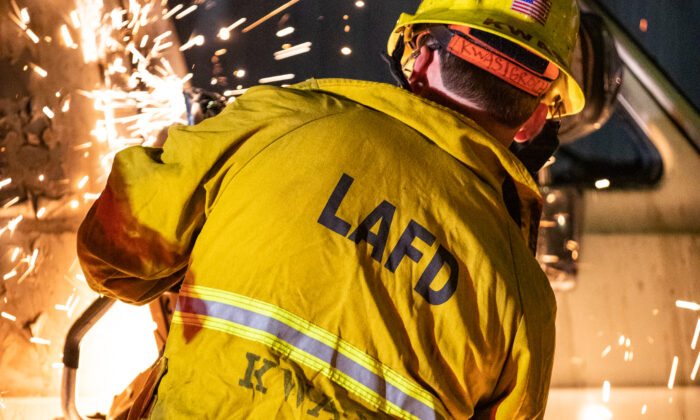 Flagler, 47, died Thursday after being overcome by smoke and flames inside the home. A resident of San Clemente, Flagler was a married father of two boys, aged 15 and 13.

Members of Firefighters Local 1014, as well as family members, friends, and community members were among the hundreds of people to take part in the Monday night vigil at the Ole Hanson Beach Club, 105 W. Avenida Pico, in San Clemente.

“Words cannot convey how devastating this loss has been for Jon’s family, friends and extended fire service community,” according to the firefighters’ union. “Jon was an amazing husband, father, son, uncle and friend. He will be deeply missed.”

Funeral arrangements have not yet been announced.

Flagler was among the crew members from Fire Station 83 who responded to the blaze around 2 a.m. Thursday in the 30700 block of Tarapaca Road.

“They were engaged in a firefight at a one-story single-family dwelling,” interim county Fire Chief Anthony Marrone told reporters.

“We believe that the fire was in the attic. The smoke and the fire overcame (the firefighter). He put out a ‘mayday’ for assistance from the other firefighters that were at the scene, and they were able to quickly locate him, rescue him and start the life-saving procedures as necessary.”

Flagler was taken to Harbor-UCLA Medical Center in Torrance, where he died. He is survived by his wife, Jenny Johnson Flagler, and the couple’s two teenage boys.

Marrone said Flagler began his career with the city of Vernon in 2002.

That agency was taken over by the county fire department in 2020. The chief called Flagler “one of our bravest.”

“Right now the fire department’s priority is the care of his wife and two teenage boys and the care and support of our fire family—and those are the brothers and sisters in uniform today who are serving the residents and communities that we are sworn to protect,” Marrone said.

Sheriff’s Lt. Charles Calderaro said that when fire crews and sheriff’s deputies arrived on the scene of the fire, residents of the home were already outside.

The union has also established a memorial fund to benefit the family.