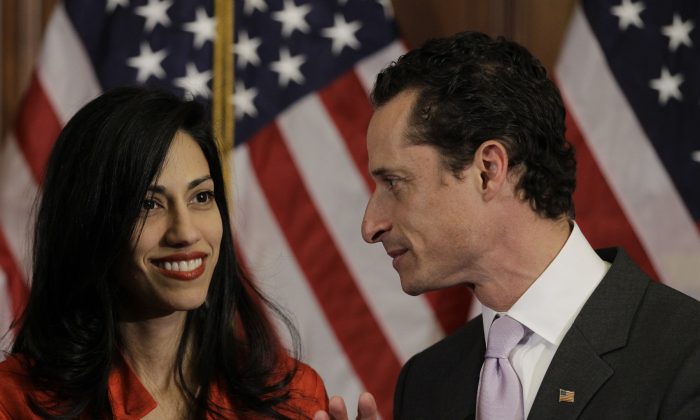 Rep. Anthony Weiner, (D-N.Y.), and his wife, Huma Abedin, aide to Secretary of State Hillary Rodham Clinton, are pictured after a ceremonial swearing in of the 112th Congress on Capitol Hill in Washington, Wednesday, Jan. 5, 2011. (AP Photo/Charles Dharapak)
New York

Huma Abedin Worked As Consultant While At State

Weiner’s wife, Huma Abedin, was allowed to do private consulting work while serving as a top adviser to Secretary of State Hillary Clinton, according to POLITICO. The move, which came after her maternity leave in the summer of 2012, was not reported in disclosure statements.

Spouses of mayoral candidates are required to disclose personal financial information with the City’s Conflict of Interest Board, although the filing is not made public, according to POLITICO.

A friend of Albedin told POLITICO she had four clients, including the State Department, Hillary Clinton, the William Jefferson Clinton Foundation and Teneo, the firm co-founded by former Bill Clinton counselor Doug Band.

Had the friend not revealed the details, the public would have never known Albedin’s added income.

The move, while not illegal, does bring into question where Albedin’s loyalties lie.

“If she was being held out as a deputy chief of staff, it would be highly unusual for her to be a part-time employee or a consultant,” Melanie Sloane, executive director of CREW, an ethics watchdog group told the New York Times.

“Being a deputy chief of staff at the State Department is generally considered more than a full-time job.”

Abedin declined requests for comments, according to the New York Times.